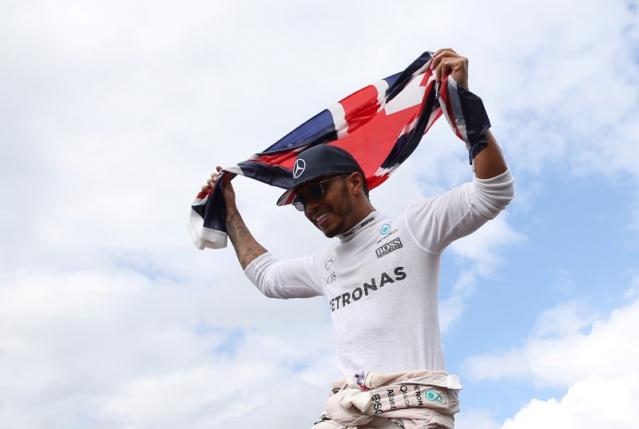 LONDON – Lewis Hamilton heads into Sunday’s Hungarian Grand Prix fired up to complete a hat-trick of victories and seize the lead in the Formula One title race for the first time this season. The triple world champion trails Mercedes team mate Nico Rosberg by just one point after a sensational fourth win of the season two weeks ago in his home British Grand Prix at Silverstone. Hamilton, who also won the race before that in Austria, surfed the Silverstone crowd in jubilation and will be hoping the wave of momentum building up behind his title defence carries him back to the top. "Ever since the low of Barcelona I've been able to cultivate this really strong mental attitude and I'm really feeling that fire inside me right now," said Hamilton, who trailed Rosberg by 43 points after the pair collided and crashed out on the first lap in May’s Spanish Grand Prix. "I'm feeling fresh, feeling powerful and feeling confident heading to Hungary. It's a track that for some reason has always suited my style and I have incredible support there." Hamilton has won four times at the 4.3-km long Hungaroring circuit, outside Budapest, including his first victory for Mercedes in 2013. Another win for the 31-year-old at the halfway stage of the championship would be more than any driver has managed in Hungary. Hamilton and seven-times world champion Michael Schumacher currently hold the record. Rosberg, who dropped from second to third in Silverstone after a post-race penalty for breaching radio rules, will be determined to deny him that honour. "The battle is on with Lewis and I'm feeling great in myself and great in the car," said Rosberg, winner of five races this year including the first four. While the spotlight is trained on the Hamilton versus Rosberg battle, resurgent Red Bull could steal the show. Despite winning 41 of the 48 races since the start of the V6 turbo-hybrid era in 2014, Mercedes have yet to win in Hungary with the new engine. Australian Daniel Ricciardo won for Red Bull in 2014 while Sebastian Vettel was triumphant for Ferrari last year. With Ferrari's challenge fading over the last few rounds, Red Bull see a real chance to add a second win to Max Verstappen's Spanish Grand Prix triumph. "We’re actually in the race with Mercedes now at certain circuits which is great to see,” said team principal Christian Horner. "We’ve got some of the more powerful circuits out of the way ... and the circuits coming up will hopefully play to some of our strengths.” Hungary also offers misfiring McLaren the chance of a strong result at a circuit that has been good to them in the past. Jenson Button and Fernando Alonso both scored their maiden wins in Hungary, albeit with different teams, while McLaren last year scored their best result of a difficult first season with engine partners Honda. "I’m keen to see how we perform there," said Button. –Reuters