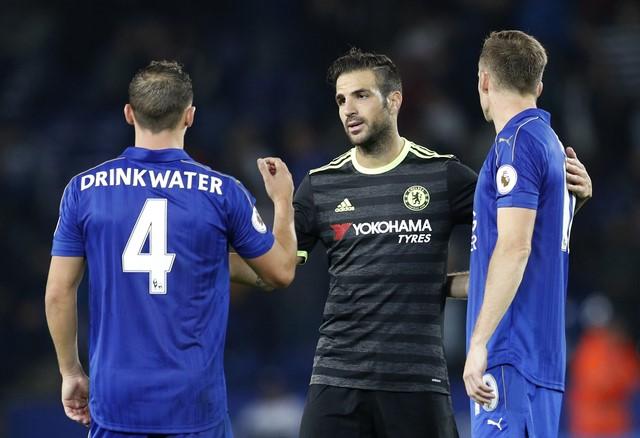 LONDON - Chelsea midfielder Cesc Fabregas gave his manager a reminder of his talents by scoring twice in extra time as they fought back from two goals down to knock Premier League champions Leicester City out of the League Cup 4-2. Spaniard Fabregas has played a bit-part role in Antonio Conte's Chelsea side since the start of the season, but produced two neat finishes in the space of two minutes to turn the third-round tie on its head. Record eight-times winners Liverpool eased past Derby County 3-0, while Arsenal enjoyed a 4-0 stroll at Nottingham Forest. It was a bad night, however, for Premier League sides Everton and Bournemouth, who exited the competition at the hands of second-tier opponents. Everton were dumped out 2-0 at home by Norwich City, while Bournemouth suffered a 3-2 home defeat by Preston North End. In the standout fixture, Chelsea seemed to be heading out when Leicester's Shinji Okazaki twice capitalised on poor defending to put the Foxes ahead. But the Chelsea fightback began when Fabregas's corner was headed back across goal and over the line by defender Gary Cahill just before halftime and they equalised with a stunning volley from Cesar Azpilicueta four minutes after the restart. With extra time approaching, Leicester defender Marcin Wasilewski was sent off for a second yellow card after a clumsy charge into Diego Costa, swinging the momentum Chelsea's way. From that moment there only looked like being one winner and Fabregas's clinical finishes secured Chelsea's spot in the fourth round as well as giving the Spain international a boost after a difficult start to the season. "HAPPY TO PLAY" Conte has preferred former Leicester player N'Golo Kante, Nemanja Matic and Oscar in central midfield in Chelsea's opening encounters but Fabregas showed he still has something to offer when he clipped the ball home two minutes into extra time. Two minutes later, he smashed a left-foot effort into the net after Leicester failed to clear a high ball in the box. "I was happy to play from the start and if I can help the team then fantastic," Fabregas told Sky Sports. "Hopefully this will shut up a few journalists who are chatting rubbish all the time." Liverpool, beaten on penalties by Manchester City in last season's final, booked their spot in the next round with goals from Ragnar Klavan, Philippe Coutinho and Divock Origi and it was an equally straightforward romp for Arsenal. Forest's Denmark striker Nicklas Bendtner lined up against his old club, but it was Arsenal's new arrivals who shone. Their Switzerland midfielder Granit Xhaka rifled in the opener from distance and Spaniard Lucas Perez scored a penalty and a fine individual goal. England forward Alex Oxlade-Chamberlain netted the fourth goal in stoppage time. Everton were undone by a former favourite as Steven Naismith returned to Goodison Park to torment his old employers by scoring Norwich's opener after 41 minutes before Josh Murphy struck a rising drive from distance to complete the victory. Preston striker Simon Makienok bagged a hat-trick including an extra-time winner to help them past Bournemouth. Newcastle United progressed with a 2-0 victory at home to Wolverhampton Wanderers, having lost to the Midlands side by the same scoreline in the Championship on Saturday. Reading won 2-1 away to Brighton & Hove Albion and Leeds United beat Blackburn Rovers 1-0 in all second-tier ties. On Wednesday in-form holders Manchester City and their new manager Pep Guradiola visit Swansea City, while Jose Mourinho's struggling Manchester United outfit travel to third-tier Northampton Town and Tottenham Hotspur host Gillingham. -Reuters