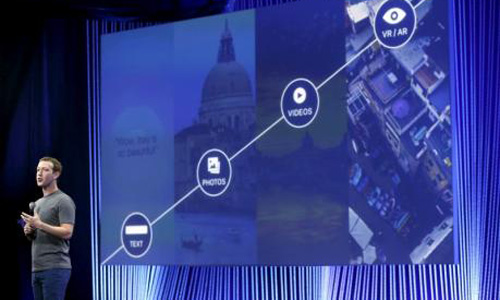 SAN FRANCISCO - Facebook Inc (FB.O) on Wednesday opened up its Messenger service for developers to create apps and for shoppers to communicate directly with retailers, as the Internet company seeks to expand its reach. The new features mark Facebook's latest effort to transform its mobile messaging service into a full-featured platform with the same pull with consumers and businesses as its flagship 1.4-billion user social network. Facebook unveiled the new features at its annual developer conference in San Francisco, for the first time allowing developers to create apps that function inside the Messenger service used by more than 600 million people. Messenger will feature more than 40 different apps in the next few days, allowing users to send each other sports clips, animations and other items, Facebook said. Among the first apps will be those from ESPN and The Weather Channel. "This is just the first step toward creating better sharing experiences across this whole family of apps," Facebook Chief Executive Mark Zuckerberg said on stage at the conference. Facebook has amassed a collection of mobile apps in recent years, including photo-sharing app Instagram and messaging service WhatsApp, which Facebook acquired for $19 billion in 2014. But the spotlight was on Messenger during the first day of the two-day event. Facebook hopes to turn its messaging service into one that operates independently of the company's social media network as it faces intensifying competition from Twitter Inc (TWTR.N) and Google Inc (GOOGL.O), as well as fast-growing messaging apps such as Snapchat and WeChat. Facebook partnered with online retailers Zulily and Everlane to let consumers contact them directly on Messenger to change online orders, such as the color of a shirt, for example, and be notified when a purchase has shipped. The service will be available in a few weeks. David Marcus, Facebook's head of messaging products, said in an interview the service was likely to expand to businesses besides retailers. Purchases can be made by sending a message, provided the store has the consumer's payment information, Marcus said. But he declined to say whether Facebook might eventually process such retail purchases directly in Messenger. The new Messenger apps are meant to improve conversations between users, Marcus said. The ESPN app offers short animated sports clips that fans can send to friends. Facebook must pre-approve apps that seek to be integrated into its Messenger service, rather than downloaded separately. But any developer is free to add basic features that will make portions of their apps compatible with Messenger. Marcus said the new features were not offered on its WhatsApp messaging service because that was accessed on a wide variety of mobile phones, including low-end devices which are not well suited for the new functions. - REUTERS