SAN FRANCISCO (Reuters) - Facebook is setting up a new engineering team in Singapore to focus on its lucrative China advertising business, according to three people familiar with the effort, even as chief executive Mark Zuckerberg ramps up criticism of a country that blocks the social network.
The team at Facebook’s Asia-Pacific headquarters is tasked with developing better ad-buying tools for Chinese customers who have to work around internet restrictions in China known as the “great firewall,” the sources said. One of the people described it as Facebook’s first significant attempt at developing regionally localized ads tools outside of its Silicon Valley headquarters, where China-related engineering work previously took place. Facebook confirmed the creation of the new team, describing it as having an “Asia-first” mission and consisting of both product and “business integrity” sub-teams. Its existence has not previously been reported. A spokeswoman said the team would serve “Asia as well as our global advertisers.” Facebook sells more than $5 billion a year worth of ad space to Chinese businesses and government agencies looking to promote their messages abroad, analysts estimate. That makes China Facebook’s biggest country for revenue after the United States, which delivered $24.1 billion in advertising sales in 2018. Zuckerberg once hoped Facebook could find a way to operate its social network in China, making a high-profile visit to the country in 2016 and vowing to learn Mandarin. Product managers went on “knowledge-exchange” trips to China, swapping expertise on app features and advertising tools with counterparts at companies like Tencent and Alibaba, one source said. The company’s China dreams were ultimately dashed by ever-more-restrictive Chinese government internet policies, compounded by political and business tensions associated with the US-China trade war. But Facebook remains eager to expand its China ad business, which boasts customers in industries including fashion, social media and gaming. With Beijing aware its businesses must operate beyond the “great firewall” to grow, Facebook is positioning itself as the conduit for them to reach global audiences. “Facebook is committed to becoming the best marketing platform for Chinese companies going abroad,” Facebook wrote in Chinese on local social network WeChat in November.

NEXT PHASE OF GROWTH

Bytedance, the parent company of social media sensation TikTok, used Facebook’s advertising tools to do exactly that. In late 2018, the company surged app-install ads on Facebook’s ad network, becoming its biggest Chinese customer as it grew TikTok’s footprint, a former Facebook employee said. It cut back drastically in 2019, to nearly nothing, according to previously unreported data from research company Sensor Tower. One source said TikTok calculated it had reached most people likely to use the app, so it shifted to building an ads business to compete against Facebook's. Graphic: Bytedance slows ad blitz on Facebook png, click here 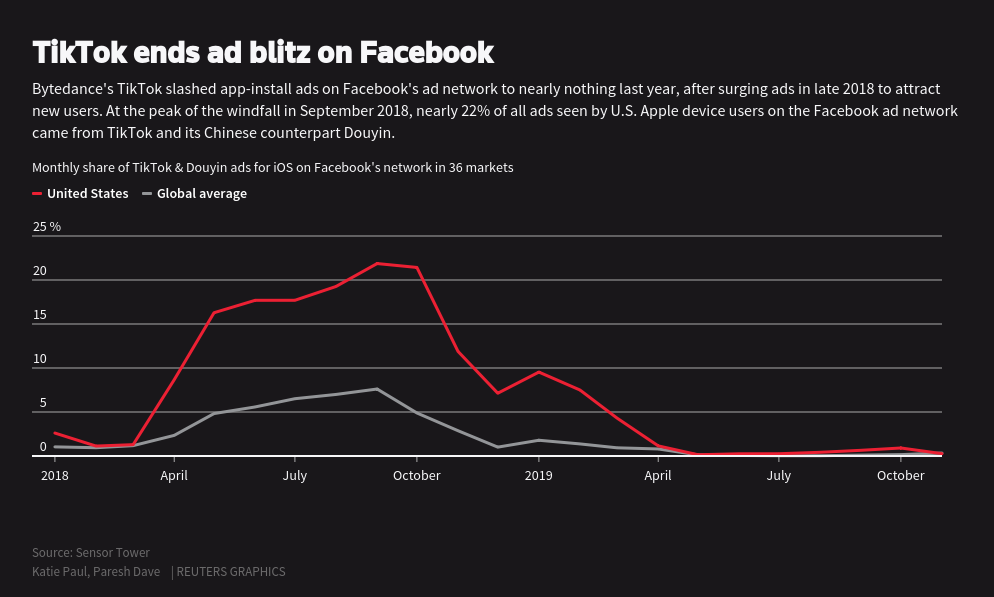 A TikTok spokesman confirmed the trend, saying the company “significantly scaled back spending and refined its ad strategy, resulting in an increased return on investment and stickiness among new users.” Now looking to smaller Chinese companies to grow sales, Facebook must ease access to its advertising tools and reassure customers worried about the political dynamics. “Small advertisers are wary of advertising with Facebook because Facebook is banned in China,” one of the people said, adding that second- and third-tier cities with smaller businesses are key targets for the next phase of growth. The new Singapore team was seeded in the spring with a handful of senior engineers who moved from Facebook’s Silicon Valley headquarters, according to LinkedIn profiles and the people familiar with the move. One source described the team as being in the “tens” of people, with Hao Xu, a nearly 9-year veteran of Facebook who previously worked in the Growth unit, managing the effort, according to his LinkedIn profile. Facebook is betting proximity to regional competitors and sales staff will lead to better ads features, the person said. In addition to China, Facebook does significant business in Asian countries including Vietnam, India and Thailand that have various types of internet restrictions. The company also wants its engineering outpost to spot emerging trends, having determined the world’s most interesting consumer technologies are being built in Asia, largely in China, one of the people said.

Even while courting Chinese advertisers, Zuckerberg took an increasingly confrontational approach with Beijing in 2019, coinciding with scrutiny of Chinese apps in Washington and new pressures over US antitrust investigations into Facebook. In March, he pledged not to build data centers in countries with “a track record of violating human rights like privacy or freedom of expression.” By October, he specifically named China, saying “we could never come to agreement on what it would take for us to operate there.” He also drew indignation on Chinese social media after accusing TikTok, which has emerged as a major US rival, of censoring political protest, a charge the startup denies. But Facebook’s China sales operations have forged ahead. In the last year Facebook has taken at least a dozen big Chinese clients on trips to India and the Middle East, and showed them data on local consumers to encourage them to market more in those regions rather than just in the United States, one of the people said. Raggy Lau, who runs Chinese small ad agency STERRY that works with 30 startups, told Reuters he expects to increase spend on Facebook in 2020 as bigger clients vie for its users. The new engineering team, meanwhile, will aim to ease access for Chinese advertisers and improve fraud detection systems, one of the people said. Facebook requires people buying ads to have one of its signature social media profiles. Clients in China can access barred overseas sites like Facebook through virtual private networks (VPNs), which allow internet users to change their browsing location to a different country. But some Chinese businesses are concerned about creating profiles in the face of censorship rules, so building a workaround that could eliminate the need for a VPN has emerged as a key priority. Greg Paull, principal at advertising consultancy R3, said his Chinese clients use brand spokespeople and online shops differently than Western clients. Facebook could also develop e-commerce tools for Chinese advertisers to organize influencers and set up storefronts, he said.