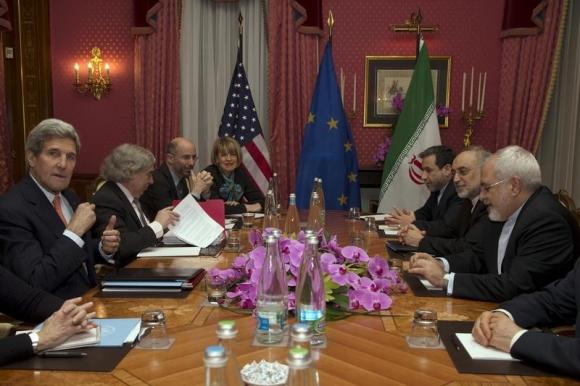 WASHINGTON/PARIS - The United States will struggle to secure a framework nuclear deal between Iranand major powers by a March 31 deadline due to resistance from Tehran and scepticism among other countries, officials said. With the two sides resuming negotiations this week, Washington is under heavy pressure as it pushes for the political framework accord that would lay the foundations for a full deal with Iran by June 30. The aim is to curb Iran's sensitive nuclear activities for at least a decade in exchange for an end to sanctions that have crippled its economy. However, Supreme Leader Ayatollah Ali Khamenei has rejected the idea of two accords, fearing a framework agreement would remove Tehran's ability to negotiate on details, Iranian officials say. France, which blocked an interim deal in 2013 until changes were made, has doubts about trying to secure the framework agreement at the talks in Lausanne, Switzerland. It has suggested focusing on the June deadline. "(Saying that) an agreement has to be reached by the end of March is a bad tactic," French Ambassador to Washington and former nuclear negotiator Gerard Araud said last week, warning against putting "pressure on ourselves to conclude at any price". Israel, Saudi Arabia, France and the US Congress have all raised concerns that the administration of President Barack Obama might be willing to conclude a deal that would allow Iran to develop a nuclear weapons capability in the future. The talks are expected to start on Thursday with a meeting between Iranian Foreign Minister Mohammad Javad Zarif and US Secretary of State John Kerry. Ministers from some other members of the six power group are expected to arrive later. The Obama administration admits the task will not be easy. "We believe we can get a political framework done by the end of March," a senior US official told Reuters. "It doesn't mean we'll get there, but we're not working for anything less." Iran's FARS news agency cited an Iranian official as saying that something less substantial would emerge. "It is very likely that they sign a joint statement in Lausanne and not an agreement," the official said. Officials from some of the six powers - Britain, China, France, Germany, Russia and the United States - have echoed this view with some suggesting a memorandum of understanding could be agreed. "TWO STEPS BACK" The main problem, Western officials complain, is Tehran has not budged from positions it held 18 months ago when negotiations began amid hopes that the new Iranian president, Hassan Rouhani, wanted a deal to rescue Iran's economy. "The Iranians take two steps forward, one step back, then two steps back and one step forward. We’re not moving," a senior Western diplomat said on condition of anonymity. France's UN Ambassador Francois Delattre told the Security Council on Tuesday that there were deep disagreements with Iran, especially on the issues of research and development of advanced centrifuges and lifting US, UN and European Union sanctions. Iran wants all sanctions on its energy and financial sectors lifted immediately if there is a deal, while Western powers want them removed gradually. Despite the Israeli and Saudi concerns, officials say the US delegation does not believe an agreement is inevitable. "There are still significant gaps and important choices that need to be made in these negotiations and as we have said many times no deal is better than a bad deal," US deputy ambassador to the United Nations, David Pressman, said on Tuesday. The negotiations pick up from last week's unsuccessful round. Officials close to the talks said the Iranians left because of tensions within the six-power group. The Americans remain concerned that France, whose positions are closest to Israel's, could once again block a deal, they added. If there is no deal, the Republican-led Congress has said it would press ahead with new US sanctions despite Obama's vow to veto any such moves. Several Western officials said they were worried that Obama sees a deal with Iran as one of the few trophies he could claim before he leaves office in January 2017. "It's a question of Obama's legacy at this point," an official said. "Middle East peace is unachievable. Iran is achievable." US administration officials insist those fears are groundless and say they are working for a deal that would make it impossible for Iran to construct a nuclear weapon swiftly. Tehran denies harboring any such ambitions but has refused to halt uranium enrichment as demanded by the UN Security Council. - Reuters