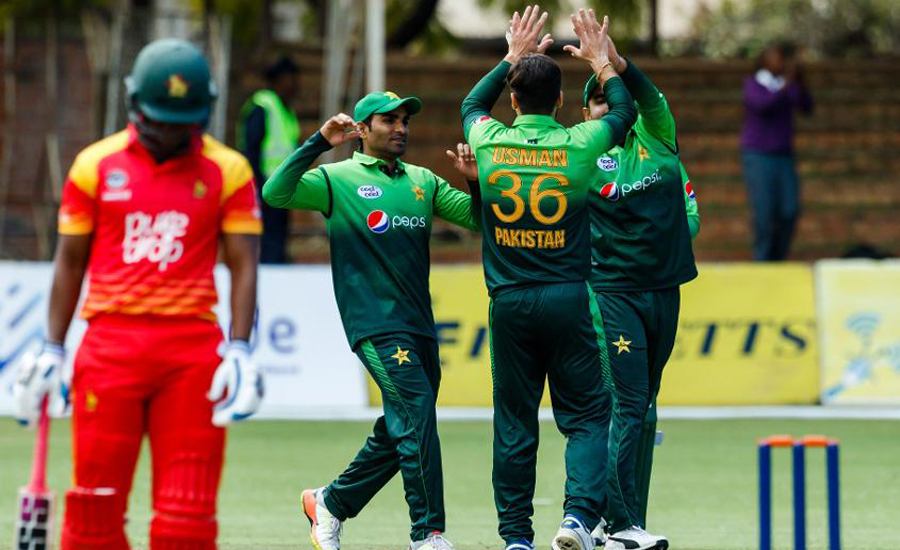 BULAWAYO, Zimbabwe – Fakhar Zaman’s second ODI century, and seven wickets shared between Usman Khan and Hassan Ali, ensured Pakistan completed a nine-wicket win and took a 2-0 lead in the five-match ODI series. Pakistan were always heavy favourites for this series after many of Zimbabwe’s best players ruled themselves out due to an ongoing pay dispute, and though the result is not yet decided – the tourists lead 2-0 with three to play – it seems certain they will secure the rubber at some point. Much of the interest therefore is not in the overall result, but instead in how close Zimbabwe can get, and whether this slightly ramshackle group of players can challenge not this time, but perhaps in one, two or even five years' time. To that end, there were some positives to be taken for the home side. For this wasn’t quite as demoralising a thrashing as the 201-run marmalising in the first ODI; there was heartening fight shown by Zimbabwe. There were gritty fifties for Moor and Masakadza, several other starts besides which indicated there may be more to come from this side, and a testing new-ball spell from Blessing Muzarabani, who conceded just 19 from his first five overs and found the edge on more than one occasion. But in the end, and worryingly but not unexpectedly, Pakistan’s skills were simply far superior. In Usman Khan and Hassan Ali they had a pair of quicks who looked capable of making incisions at any stage of the game, while Zaman and Imamul Haq showed the ability to defy tricky spells of bowling, and then to cash in when conditions allowed. Usman was the star with the ball, starting the match with a special new-ball spell which accounted for both Zimbabwe’s openers, Brian Chari nicking a lovely away-swinging delivery through to the keeper, and Chamu Chibhabha under-edging a cut to a ball that was too full for the stroke. He then returned to stymie Zimbabwe’s late charge with two searing yorkers in two balls, the first of which smashed into Donald Tiripano’s stumps, and the second was only prevented from doing so by Liam Roche’s pads. In-between, Hassan Ali struck regularly through the middle overs, a skill he has proved himself as good at as any pace bowler in the world over the last year and a bit. He angled one in to Tarisai Musakanda to have the No.4 lbw and break a 62-run stand, brought one back in miles to demolish Ryan Murray’s stumps, and out-thought PJ Moor in the death overs, encouraging him to flat-bat a length ball skywards. Either would have been a worthy candidate for Player of the Match were it not for Zaman’s stunning century that sealed the win. He and Imam again added 100 together for the first wicket without fuss, and this time it was the senior man’s turn to make a century, and Imam’s to fall short, run out unfortunately for 44 as his bat bounced up before being grounded over the crease. Though Zaman’s runs came at close to a run a ball, this was no mindless thwack; that would have been unnecessary. Instead, he waited to put the bad ball to the boundary, tucking the good ones for singles in the meantime. Victory was eventually completed as Tiripano dug one in, only for it to pass harmlessly down the leg side for a wide. It summed up Zimbabwe’s day. They tried hard and couldn’t be faulted for effort; it was Pakistan’s skill that won out. –ICC SCOREBOARD