KARACHI (92 News) – Fans of former national cricket team skipper Sarfaraz Ahmed disappointed and show anger in form of protest against the decision of PCB for sacking from his post. Hundreds of fans gathered outside the residence of Sarfaraz Ahmed to express solidarity with him against PCB’s decision to sack him as captain of Pakistan Cricket team. The protestors in Karachi and Hyderabad were carrying placards displaying photos of Sarfaraz Ahmed, they chanted slogans against Coach Misbahul Haq and Shoiab Akhtar. On the other hand, former shining star and bowling coach Waqar Younis also tweeted in favour of Sarfaraz Ahmed and raised many questions. He also gave titled Sarfaraz as “Tiger”. Admiring him, he further said that Sarfaraz offered brilliant services for Pakistani team which can never be forgotten. 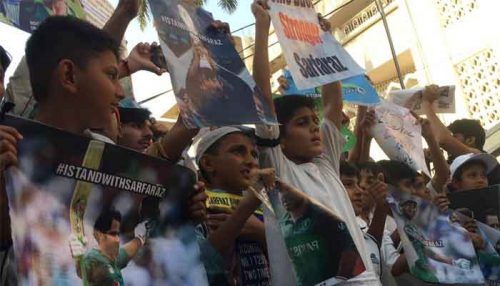 They also chanted “Captain Ko Izzat Dou” slogans in Urdu, which means give respect to the captain. Fans demanded Sarfaraz be reinstated as Pakistan’s captain, at least in the white-ball cricket as he was not bad in shorter format as captain. They also demanded PCB treat all players equally on the basis of their performance. 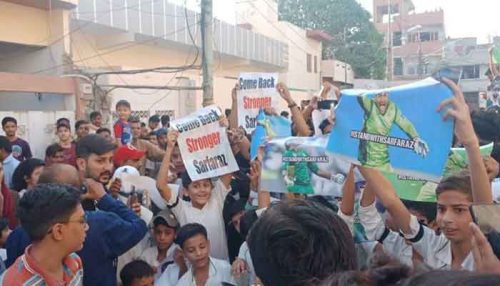 They also reminded PCB that it was  Ahmed who led 8th ranked team to Champions Trophy title while his predecessors had left the team in shambolic condition. Hockey Olympian Wasim Feroz was also among protesters to express solidarity with  Ahmed. “This was shocking to news to me,” he said while terming the decision to be unjustified and unfair.

PCB sacks Sarfaraz as captain of both formats

The (PCB) sacked Sarfaraz Ahmed as their captain across all formats, naming Azhar Ali as the new Test skipper and putting Babar Azam in charge of the Twenty20 squad. Sarfaraz’s struggles with his form have also prompted the selectors to drop the stumper-batsman altogether from both the formats. “It has been a difficult decision to drop Sarfaraz Ahmed, who has performed well as a player and a leader,” Pakistan Cricket Board (PCB) chairman Ehsan Mani said in a statement. “But, his loss in form and confidence is visible and, in the best interest of the team, it has been decided to leave him out and provide him the opportunity to reflect and regroup himself and try to reclaim his form away from international cricket.” Pakistan under Sarfaraz failed to make the knockout stage in this year’s 50-overs World Cup and languish at seventh in test rankings. A new one-day captain will be named later, the PCB said.