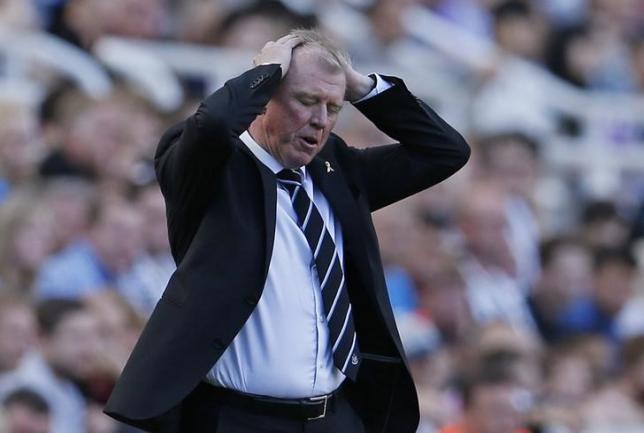 LONDON - With just two points from their first six Premier League games and pressure mounting from the stands, Newcastle United manager Steve McClaren has called on the fans to show "blind faith and belief" that the club will turn it around. Newcastle are one of three teams still searching for their first league win of the season and have only local rivals Sunderland below them. The Magpies host Sheffield Wednesday in the League Cup on Wednesday before facing tough games against champions Chelsea and Manchester City in the league. McClaren, who has described the club's start to the season as a "bit like a car crash", said he understood fans' frustrations but called on them to be patient. "A bit of blind faith and belief that eventually we will get it right, turn it around, and start performing and winning games. Yes, we will eventually do that," McClaren told reporters. "As a supporter, with what happened last season, and then the expectation of this, it is a little bit of blind faith that is needed, that is required. "We don't need to be told, we know what is going on. We know what we have to do, we know the solutions, we just have to go out there and do it," he added. Newcastle fans will hope to avoid a repeat of last season, where they failed to record a win in their first eight games and needed a win over West Ham on the final day to ensure their Premier League survival. The club spent a reported 50 million pounds ($76.76 million) to bring in five new players to the squad, four of them to strengthen Newcastle's attacking depth, but the goals have not been forthcoming, scoring just three in the league so far. Newcastle's problems worsened on Tuesday when defender Steven Taylor was ruled out for eight weeks and striker Papiss Cisse sidelined for the Cup tie against Wednesday. McClaren dismissed reports of problems in the dressing room, with injury-plagued midfielder Cheick Tiote and out-of-form forward Cisse receiving heavy criticism. "There's been no problem with Cheick. He's not a bad egg at all," McClaren said. "He hasn't been able to build up his fitness but I know Cheick well and I couldn't be any stronger in terms of saying that he's not any trouble. "Papiss is Papiss, and he goes around with a smile on his face. That's the culture that he's got," he added. -Reuters