LAHORE (92 News) – A farmer has on Thursday died of cardiac arrest as hundreds of farmers and employees of Punjab Rural Support Program (PRSP) continue to stage protest demonstration in favor of their demands for the second day at Lahore’s Mall Road near Punjab assembly. Hundreds of protesters from different cities of the province have gathered in favor for their demands, blocking all roads leading to Mall Road. The activists of Kisan Ittehad Union set alight bags of potato in protest for not getting reasonable price of their potato crop. Protesters carrying banners and flags chanted slogans against the government. The protesting farmers have come from 14 districts of Punjab including Multan, Lodhran, Kabirwala and Bahawalpur. On the other hand, the employees of Punjab Rural Support Program (PRSP) have also staged a protest, demanding regularization of all workers. 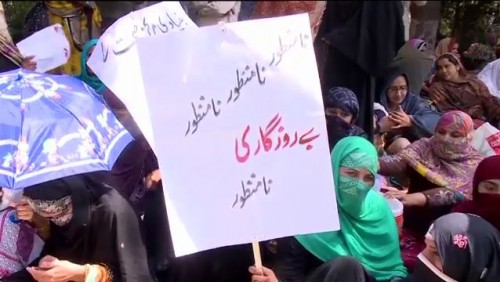