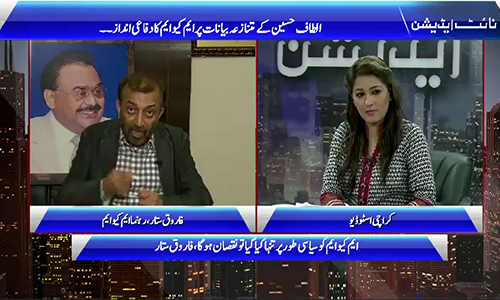 KARACHI (92 News) – MQM leader Farooq Sattar has demanded an independent judicial commission on the arrest of workers. Talking to 92 News Programme ‘Night Edition’ on Saturday, he said that the letter was erroneously sent to the Indian high commissioner. “We neither called India for help nor did it come. It should satisfy the people,” he said. The MQM leader said that an attempt should not be made to push them to the wall. “We called India coward and ignominious. There is need to consider it as well. If India is an enemy, there should not be its embassy in Pakistan,” he said. He said that their thousands of workers were arrested and martyred. “We are true Pakistanis and patriots.” Farooq Sattar said that the MQM should also be hugged when estranged Balcohs are being reconciled. “I say that accused should be searched in my ranks. A distinction should be made between ‘wanted’ and ‘unwanted’. Crime has reduced by 50 percent in Karachi,” he said. The MQM chief said that he was not against the Pakistan forces.