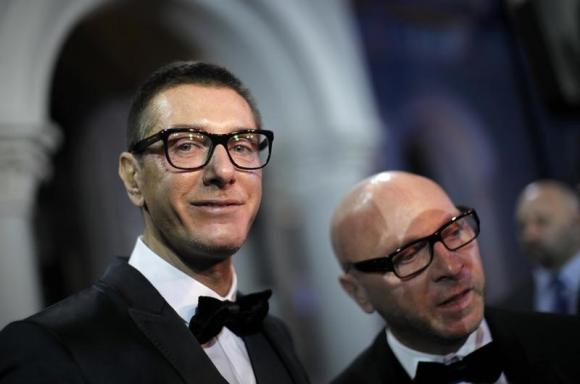 LONDON - Outraged celebrities tore into Italian fashion designers Domenico Dolce and Stefano Gabbana on Monday after Dolce described children born to gay couples through fertility treatment as "synthetic". Pop superstar Elton John, leading the chorus of criticism, called for a boycott of the brand on Sunday. Victoria Beckham, a former Dolce and Gabbana ambassador, offered John sympathy on Monday, sending a "message of love" to the singer, his husband partner David Furnish and their two sons Zachary and Elijah, and to "all the beautiful IVF babies". Rock star Courtney Love accused the Italian pair of "senseless bigotry". But Gabbana dug his heels in, saying they were entitled to their opinion and calling John a fascist. An industry expert doubted any boycott call would have any effect. Concetta Lanciaux, a luxury industry consultant and former adviser to Bernard Arnault, CEO and founder of luxury group LVMH, said she did not think John's boycott demand would have an impact on D&G’s sales. “Consumers understand the humor of Domenico and Stefano, who are known for their wit. In addition, new consumers, even if they do not agree with the statement, like to think we live in a free world where people still can express their feelings and opinions,” she said. The furor erupted after Italian magazine Panorama quoted Sicilian-born Dolce as criticizing fertility treatment and same-sex parenting. "You are born and you have a father and a mother. Or at least it should be like this, that's why I am not convinced by chemical children, synthetic babies, wombs for rent," Dolce said. John responded angrily, vowing to never wear Dolce and Gabbana clothes again. "How dare you refer to my beautiful children as 'synthetic'. And shame on you for wagging your judgmental little fingers at IVF ... Your archaic thinking is out of step with the times, just like your fashions," John said. Friends and celebrities from the acting, fashion and music world rallied to the cause. Love said in her tweet: "Just round up all my Dolce & Gabbana pieces, I want to burn them ... boycott senseless bigotry!" "WAKE UP, IT'S 2015" Singer Ricky Martin, who is gay and has twin sons by a surrogate mother, wrote: "Your voices are too powerful to be spreading too much hate. Wake up, it's 2015. Love yourself guys." Screenwriter Ryan Murphy, who created the TV show Glee and also has a child via a surrogate with his husband, said: "These designers' horrifying views are never in fashion. Their clothes are as ugly as their hate." Dolce and Gabbana, whose clients have ranged from Madonna to the Italian soccer team, have marketed one of their new collections around the theme of family. Their fashion show featured models clutching babies on the catwalk and one male sweater sported a photo print of a traditional family. The pair once had a romantic relationship but have remained business partners after it ended. Dolce said his Sicilian upbringing made him pretty traditional. Gabbana said in a statement on Sunday they did not intend to express judgment of other people's choices but he believed in freedom of expression. However, as the storm raged on Monday, Gabbana took a harder line. "I wasn't expecting it from a person like Elton John whom I considered -- I underline considered -- intelligent. You preach understanding, you preach tolerance and then you attack? Just because someone thinks differently to you?" he told Corriere della Sera newspaper. Asked if he had spoken to John, he said: "It's useless, this is just an authoritarian way of seeing things: if you agree with me, good, otherwise I'll attack. And I wrote to him, in the comments on Instagram: fascist." Dolce had said he felt he could not have a child because he was gay. "Domenico said he would prefer a classical family, that's his opinion. He doesn't feel at ease with assisted fertility, that's his traditional Sicilian imprinting," Gabbana said. The furor has echoes of the John Galliano affair. The head designer for Christian Dior was dismissed after an anti-Semitic rant in a Paris bar in 2011. He was also convicted in a French court of making racist comments. However, Gabbana seemed not to be worried about the possible business impact on the firm, which is not publicly listed. - Reuters