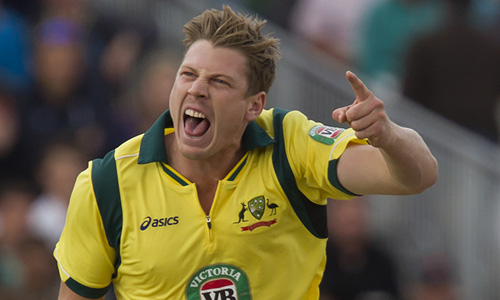 SYDNEY - James Faulkner has built a reputation as Australia's best finisher, the man who can always be relied on to get the team across the line in a tight finish. Faulkner hasn't done that so far in the World Cup. Injured just before the tournament started, he missed Australia's first three matches and has been slowly working his way back to full fitness. So far, it hasn't mattered. The Australians have made it through to the semi-finals without too much fuss, but the hard work has only just begun. Australia's next opponent is India, the defending world champions. It is a match too close to call and Faulkner could be the key. Despite his lack of time at the crease, the 24-year-old is confident he can pick up where he left off and start scoring runs again. "I've spent a fair bit of time in the nets now, I feel like I'm ready to go," he told a news conference at the Sydney Cricket ground on Monday. "As a batting group, we're playing quite nicely at the moment." But Faulkner's most important role may not be with the bat but with the ball. One of the three left-arm fast bowlers in the Australian team, he played a pivotal role in Australia's pool win over Sri Lanka at the SCG. He bagged three wickets, including the vital scalp of Kumar Sangakkara, and knows bowling could prove decisive on a pitch that has produced high scores all summer. "I'm expecting a lot of runs," he said. "If you look at the past, between India and Australia, whether we played them over there or in Australia, you've seen a lot of runs and I think that will happen come game day." The Australians and Indians have been playing each other all summer, with the World Cup following on from their four-match test series and the subsequent tri-nation limited-overs tournament also involving England. The Australians have dominated so far but Faulkner said the prospect of making a World Cup final would leave both teams a little jittery. "I think everyone's going to be nervous in their own little way and it's up to them how they want to deal with it," Faulkner said. "I think you could see a lot of nerves were on show a couple of nights ago (during the quarter-finals) and I think that's good. "Both teams are exposed and I think if you don't have nerves, you have issues." Faulkner said he was confident Australia would control their emotions under any circumstances, even when chasing down a huge target. "You definitely have to have the belief, no matter what the total is that you're chasing," he said. "It's all about your start, whether you're chasing or whether you're setting, if you start well with bat and ball more times than not you're going to end up in a position in the last 10 or 15 overs when you have a crack at chasing a big total." - REUTERS