Faulkner hopes to dust off baggy green cap in Bangladesh 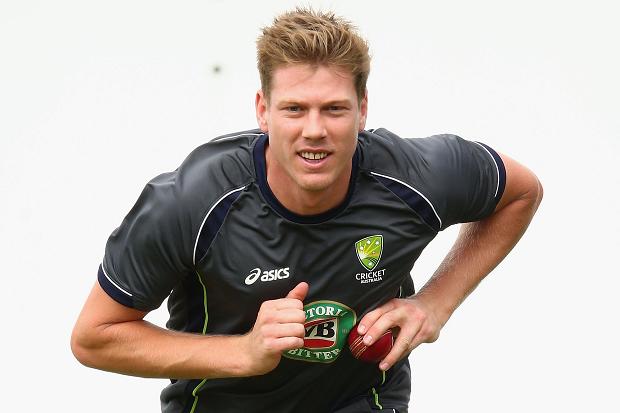 Faulkner hopes to dust off baggy green cap in Bangladesh

MELBOURNE - Since playing his sole test for Australia in 2013, every so often a wistful James Faulkner has pulled out his baggy green test cap to stoke the aspirations for a career yet to bloom. The 25-year-old all-rounder now hopes to give the cap a proper dusting off on tour in Bangladesh after replacing injured team mate Pat Cummins in the 15-man squad. Like fellow one-test wonder Cummins, who took seven wickets on debut against South Africa in 2011, Faulkner also made a splash in his only start for Australia, bagging six wickets against England in a dead rubber at The Oval. While Cummins' ambitions have been thwarted by injuries, Faulkner has been frustrated mainly by selectors, who have preferred Mitchell Marsh as a back-up all-rounder to veteran Shane Watson, now recently retired. With Watson gone and Cummins sidelined with a lower back fracture, the door has creaked open a little for Faulkner, though he may well end up carrying the drinks for the tests in Chittagong and Dhaka. "I get (my Baggy Green) out every now and again and have a look at it but there might be a little bit of dust on it because it's been a good couple of years," he said at Cricket Tasmania's season launch in Hobart on Friday. "It's a different feeling and I've only got the taste once, but it was enough to keep driving me to get back into the squad and hopefully I can get an opportunity again and do well." A handy left-arm paceman and a dashing lower-order batsman, Faulkner has been a fixture in Australia's limited overs sides since the start of 2013. He underlined his quality with a man-of-the-match performance against New Zealand in Australia's victorious World Cup final in March. He narrowly missed out on a place in Australia's test squads for the tours of the Caribbean and England earlier this year, but selectors chairman Rod Marsh left few in doubt there were big plans ahead for the Launceston-born player. Those plans were shelved for a time in England, where Faulkner was caught drink-driving after a night out with wicketkeeper Tim Paine. He was promptly dumped from the squads for the limited overs matches and feared it was a mistake he might regret for the rest of his life. The wheel of fortune has since turned to put Faulkner back in the frame but he still faces stiff competition for a place in Bangladesh. Marsh aside, spin-bowling all-rounder Glenn Maxwell is similarly desperate to carve out a niche in Steven Smith's team. Little wonder Faulkner was busy on Friday pressing the case for a multiple all-round assault. "I think most teams around the world now are playing two or three all-rounders so there's no reason why we can't all play together especially in those conditions as well," he said. -Reuters