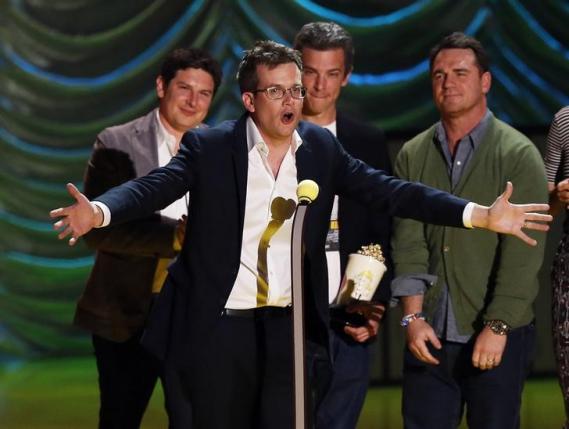 LOS ANGELES - In a night of vagina jokes, naughty humor and a crotch-grab at the irreverent MTV Movie Awards, teen cancer romance "The Fault In Our Stars" walked away the big winner while "Iron Man" Robert Downey Jr. delivered wise words for the youth-orientated show. Scarlett Johansson, Mark Ruffalo, Chris Hemsworth, Chris Evans and Jeremy Renner, the star cast of upcoming summer blockbuster "Avengers: Age of Ultron," handed their co-star Downey the MTV Generation Award, playfully kneeling at his feet as he gave his speech. "I've grown up, struggled, failed, succeeded, partied way too much, repented, begged for second chances and literally clawed my way to the top," the 50-year-old actor said. "With my fellow Avengers, I advise you to dream big, work hard, keep your noses clean, be of service and, because you can, define your generation," he said. "Fault," about two teenagers stricken with cancer who fall in love, won three awards: Movie of the Year, best female performance for lead actress Shailene Woodley and best kiss for Woodley and co-star Ansel Elgort. [caption id="attachment_15988" align="alignnone" width="500"] 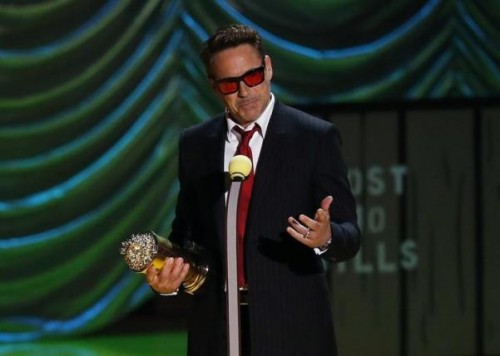 Actor Robert Downey Jr. accepts the MTV Generation Award during the 2015 MTV Movie Awards in Los Angeles, California April 12, 2015.[/caption]   Woodley, 23, dedicated her accolade to author John Green, who penned the novel on which the film was based. "It changed my life when I read it and dramatically influenced who I am today, and his words will transcend time," Woodley said as Green shed tears in the audience. Woodley also received the night's Trailblazer Award, which rewards individuals carving a unique and inspirational path in movies, from her "Divergent" co-star Miles Teller, who praised the actress for being "an incredible force of nature." Viacom Inc-owned (VIAB.O) MTV's Movie Awards ushers in the summer blockbuster movie season, and is known for its more unconventional award categories voted for by fans, such as best scared-as-s**t performance, won by Jennifer Lopez for low-budget horror movie "Boy Next Door." The night's most irreverent moments came courtesy of comedian host Amy Schumer, who filled her monologue and movie parody sketches with sexual innuendo. She also shared a passionate kiss with model Amber Rose, while "Pitch Perfect" star Rebel Wilson made a joke about her vagina while dressed in a bra and angel wings on stage. "Neighbors" stars Zac Efron and Dave Franco accepted their popcorn-shaped accolade for best comedic duo dressed in character from the raucous comedy, with Efron grabbing Franco's crotch on stage. "Neighbors" and dystopian young adult thriller "The Maze Runner" also won three awards each, but most were not televised. - Reuters