‘Favourite’ asks for moon to play but handed over whole country: Bilawal 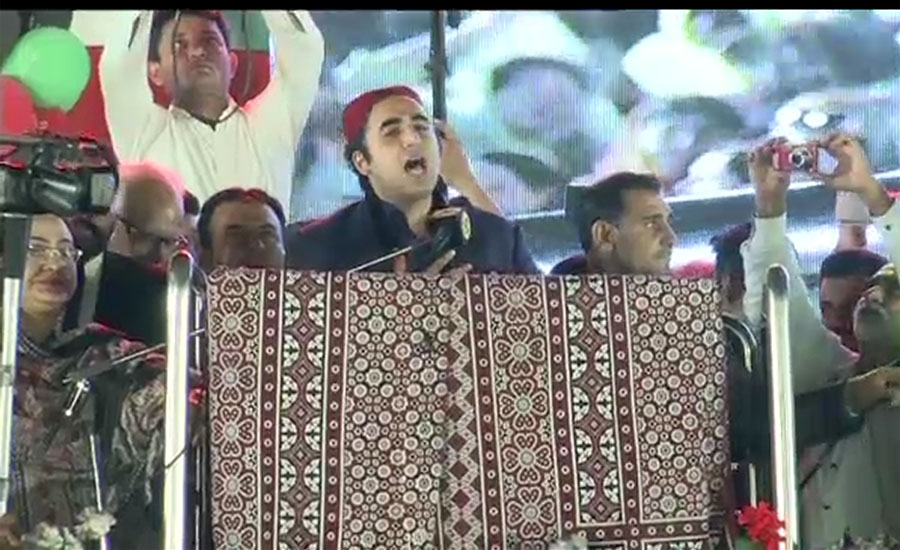 ‘Favourite’ asks for moon to play but handed over whole country: Bilawal

SUKKUR (92 News) – Pakistan Peoples’ Party (PPP) chairman Bilawal Bhutto Zardari on Friday said that previously they were up against one ‘favourite’ individual, but now another has entered the field. The PPP chairman harshly criticized PM Imran Khan and the Pakistan Tehreek-e-Insaf (PTI) government while addressing a political gathering in Sukkur with regard to 51st Foundation Day of his party. Bilawal slammed the rulers for taking U-turns on their promises made with the people, saying that Khan Saheb took 100 U-turns during 100 days. He termed Imran Khan says one thing during the day and the other at night, and keeps taking U-turns one after another. After U-turns the PPP chairman took at jibe at a ‘favourite’ and said previously they were fighting against one ‘favourite’ individual, but now another has entered the politics. “This is a unique blue-eyed boy who asked for a moon to play, but was handed over the whole country,” he added. Bilawal Bhutto said that Imran Khan promised to eliminate poverty not to the poor. He also said that the government is making unemployed as thousands of people. Discussing the terrorism, the PPP chairman said this country will not make progress whenever the prime minister would not consider the war against terrorism its own war. The PPP chairman also told the prime minister that a leader is the one who stands by his commitment with the masses, asking, “What happened with Mengal’s six points?” He also said that the incumbent government is invading the autonomy of the provinces and the 18th amendment. Bilawal Butto further asked that where the promise of South Punjab as separate province is? He slammed the government as saying the government does not want to lay down from the containers. Former president and PPP co-chairman Asif Ali Zardari also addressed the gathering. Delegates from all the provinces as well as Azad Jammu and Kashmir and Gilgit-Baltistan also attended the event.