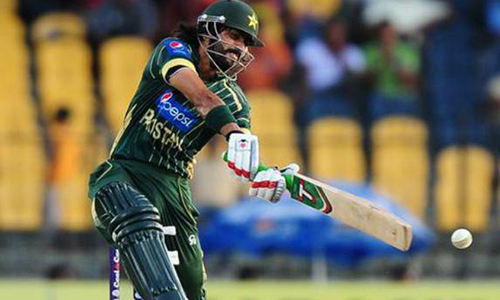 LONDON – Pakistan recalled batsman Fawad Alam from Test wilderness on Wednesday while paceman Wahab Riaz returned from a hand injury to find a place in the 15-man squad for the three-match series against England starting next month in the United Arab Emirates. Left-handed Fawad, who played his third Test in New Zealand in 2009 before being dropped from the side, was rewarded for his rich form in domestic cricket. The 29-year-old, however, cannot take his place in Pakistan's crammed middle order for granted with captain Misbahul Haq, former captain Younis Khan and one-day skipper Azhar Ali being the automatic choices. Their bowling department has been strengthened by Wahab's return from a hand injury he had sustained during the recent tour of Sri Lanka. Leg-spinner Yasir Shah and left-arm spinner Zulfiqar Babar are the two frontline spinners in their slow bowling department. "In the light of Misbahul Haq recommendations, we have kept the options open for the 16th player in the Test squad," chief selector Haroon Rashid said in a statement, referring to left-arm spinners Zafar Gohar and Mohammad Asghar who would play practice matches against England. "... whoever among the two performs well would be added to the Test squad," he added. Pakistan ignored the trio of former skipper Salman Butt and pacemen Mohammad Asif and Mohammad Aamir who were cleared earlier this month to return to cricket after serving bans for their involvement in a 2010 spot-fixing scandal in England. They will be under strict monitoring for months before they can return to international cricket, according to the Pakistan Cricket Board. There was also no place in the squad for off-spinner Saeed Ajmal, who has struggled since returning to international cricket from a ban for an illegal bowling action. Abu Dhabi hosts the first Test from Oct. 13, while Dubai (Oct. 22-26) and Sharjah (Nov. 1-5) are venues of the next two matches. Squad: Ahmed Shehzad, Shan Masood, Azhar Ali, Mohammad Hafeez, Fawad Alam, Asad Shafiq, Misbah-ul-Haq (captain), Younus Khan, Sarfraz Ahmed, Yasir Shah, Zulfiqar Babar, Wahab Riaz, Imran Khan, Rahat Ali, Junaid Khan. –Reuters