ISLAMABAD (92 News) – Minister for Information Fawad Chaudhry on Tuesday said that if former prime minister Nawaz Sharif wanted to go abroad then he should return the national money. The federal cabinet meeting held under the chair of Prime Minister Imran Khan in Islamabad. 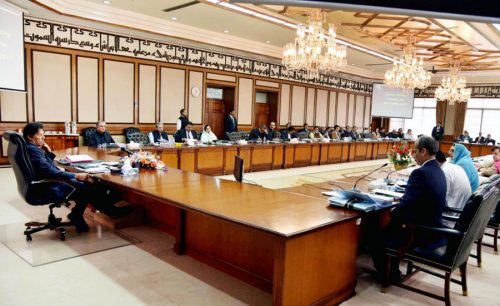 While briefing the federal cabinet meeting, Minister for Information Fawad Chaudhry Chaudhry said that the cabinet welcomed the decision by the apex court granting the ex-premier bail for six weeks. He added that that PM Khan already offered treatment of Nawaz Sharif as per his choice within country.

Fawad Chaudhry said that the federal cabinet approved new civil aviation policy of the country, adding that it was meant to promote aviation industry. He said several other policy decisions for airlines with regard to the purchase of passenger and cargo aircraft.

Kartarpur corridor to be opened in November: Fawad

Regarding Kartarpur corridor, the minister said it would be opened in November and the government had also constituted a 10-member Gurubandhak committee.

No NOC required for multi-storey buildings in Islamabad

The minister informed that the meeting also lifted the ban on constructing high-rise building. He further said that multi-storey buildings could now be constructed in the federal capital and there would be no NoC required for this purpose. He said that the prime minister directed Capital Development Authority (CDA) and Lahore Development Authority (LDA) to stop further expanding the cities. https://www.youtube.com/watch?v=RCD4yTHBXpo

Pakistan waives off NOC for foreigners to promote tourism

The information minister said the government has done away with the NOC requirement for foreigners to visit certain areas of the country. He noted that Prime Minister Imran Khan had himself been taking interest in boosting tourism in Pakistan, for which 170 countries would be provided e-visa facility. In a tweet, he said this important decision is another landmark and leap forward to promote tourism in the country. He also said Prime Minister Imran Khan's vision is to make Pakistan a heaven for tourists. According to the notification issued by the Interior Ministry, Azad Kashmir, Gilgit Baltistan and Chitral shall be non-restricted areas except Pak-China border, Wakhan Corridor, AJK along the LOC and Siachen along line of Actual contact. Free movement of foreigners shall be allowed in open cantonments except prohibited and restricted areas with visible signboards. The border crossings will be open and non-restricted.

Another landmark acheived NOC regime for foreigners come to an end, ⁦@ImranKhanPTI⁩ vision is to make Pak a heaven for tourists and following new Visa regime this important policy decision of ending NOC requirements is a leap forward #DiscoverPakistan pic.twitter.com/LEjU0QcQk5