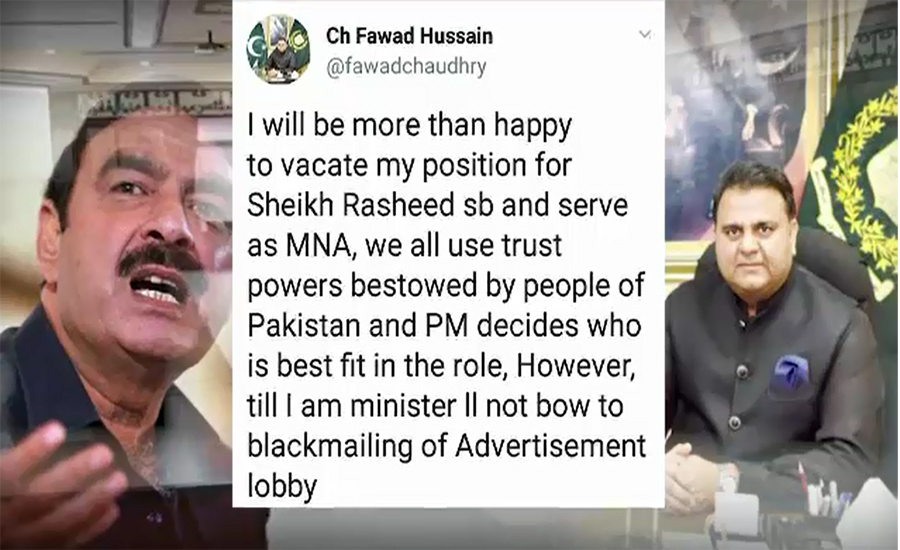 ISLAMABAD (92 News) – Federal Minister for Information Fawad Chaudhry has said that he will be more than happy to vacate his position for Sheikh Rasheed and serve as MNA. In response to news about the change of ministries, he tweeted that they all use trust powers bestowed by people of Pakistan. “PM Imran Khan will decide who is best fit in the role. However, I will not bow to blackmailing of an advertisement lobby till I am the minister,” he said. On the other hand, Railways Minister Sheikh Rasheed has denied the news about assuming the Information Ministry about him. “If asked to change the ministry, I will say love you thank you very much,” he maintained. “Fawad Ch is my brother and I cannot participate in any conspiracy against him.” The minister said that the prime minister had asked him to join the Information Ministry, but now he had no so much stamina. Meanwhile, Naeemul Haq has termed the news about change in ministries as rumours. Special Assistant to PM Iftikhar Durrani said that the prime minister is satisfied with the performance of Fawad Chauddhry. “However, the ministries will be reviewed on Monday,” he said.