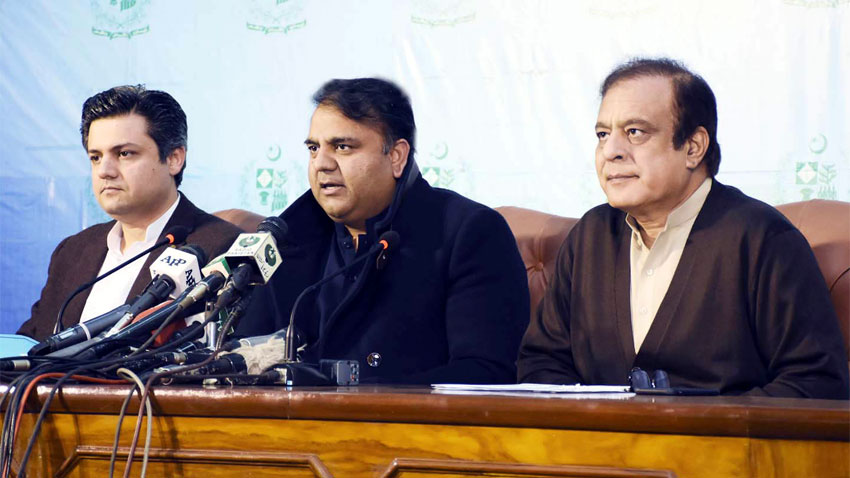 ISLAMABAD (92 News) – Minister for Information Fawad Chaudhry on Tuesday declared the press conference of Pakistan Muslim League-N (PML-N) leaders as flop show of ‘Thugs of Pakistan’. Addressing a joint press conference accompanied by Minister of State for Revenue Muhammad Hammad Azhar, the information minister said that former interior minister Ahsan Iqbal may be forgotten who launch the PML-N. Fawad said that Sharif brothers could not be elected even a counselor before former General Ziaul Haq. He also dubbed the charter of democracy signed between PPP and PML-N as charter of corruption. The minister said that both families were running the world s largest money laundering network and they termed this as charter of democracy, adding that democracy is in “danger” if they were asked about their looted money. The information minister said Nawaz Sharif could not answer simple question of NAB court about money trail of his assets. He said both Nawaz Sharif and Asif Ali Zardar established fake companies to legalize kickbacks obtained in different projects in the country. Fawad Chaudhry said that Nawaz and Zardari families were jointly running the world’s biggest network of money laundering. To a question, the minister also informed that Special Investigation Unit will proceed from tomorrow regarding confiscation of Nawaz Sharif s Al-Azizia Steel Mills and Hill Metal Company. On the occasion, Minister of State for Revenue Muhammad Hammad Azhar said that Aleema Khan never enjoyed any public office and she provided her money trail of her properties to the Supreme Court. “If anyone is involved in corruption in our ranks we will hand over the person to the NAB by ourselves,” Azhar said. He appreciated Joint Investigation Team for unearthing the corruption saga of Asif Ali Zardari. Senator Syed Shibli Faraz said that democracy gets strengthen with the accountability. He said that fake companies were used to convert black money into white.