Fawad urges UK to collaborate with Pakistan against money-laundering

Fawad urges UK to collaborate with Pakistan against money-laundering

LONDON (92 News) – Minister for Information Chaudhry Fawad Hussain says the United Kingdom should work in collaboration with Pakistan to eliminate money-laundering. He was talking to British parliamentarians during a visit to UK parliament in London on Thursday. The minister said the PTI government is committed to supremacy of law in the country and wants to rid people of poverty. He said Pakistan has good relations with the United Kingdom and desires to improve them. Chaudhry Fawad Hussain said Pakistan wants resolution of Kashmir dispute with India through negotiations. He said opening of Kartarpur corridor by Pakistan is an important and positive step and we expect similar positive response from India. He said the government will do its best to resolve problems of overseas Pakistanis. The info minister briefed the British parliamentarians on the PTI government's socio-economic reforms agenda. Talking to the journalists in London, Information Minister said Pakistan is ready to play a constructive role for peace process in the Middle East. Fawad Chaudhary said Pakistan is in contact with all the concerned quarters regarding the Middle East crisis. Commenting on Pakistan's internal matters, the minister said exports are increasing due to effective policy being undertaken by the government. He said imports have decreased and foreign remittances increased. Fawad Chaudhary said dollar's price is not a problem for the economy as economic indicators are moving in a positive direction and there is no financial crisis in the country. The Information Minister said illegal properties of Pakistani citizens have been traced in 26 countries. He said international cooperation is needed to check money laundering. Earlier, addressing the participants at International Institute of Strategic Studies in London, the minister said Prime Minister Imran Khan presented the best proposal for bringing peace and stability in Afghanistan. 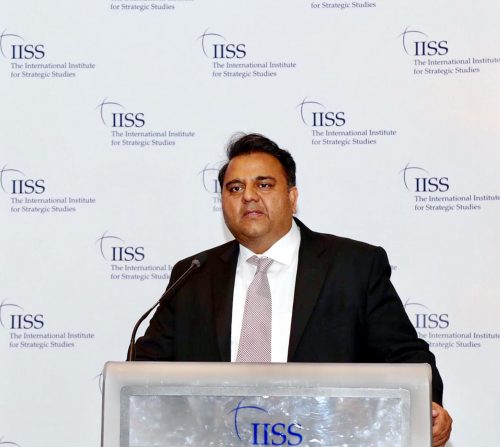 He said there is complete harmony among civil and military institutions in the country. Fawad Ch said China Pakistan Economic Corridor is a considerable economic venture and other countries, including those in the European Union, can reap the economic benefits of the project.