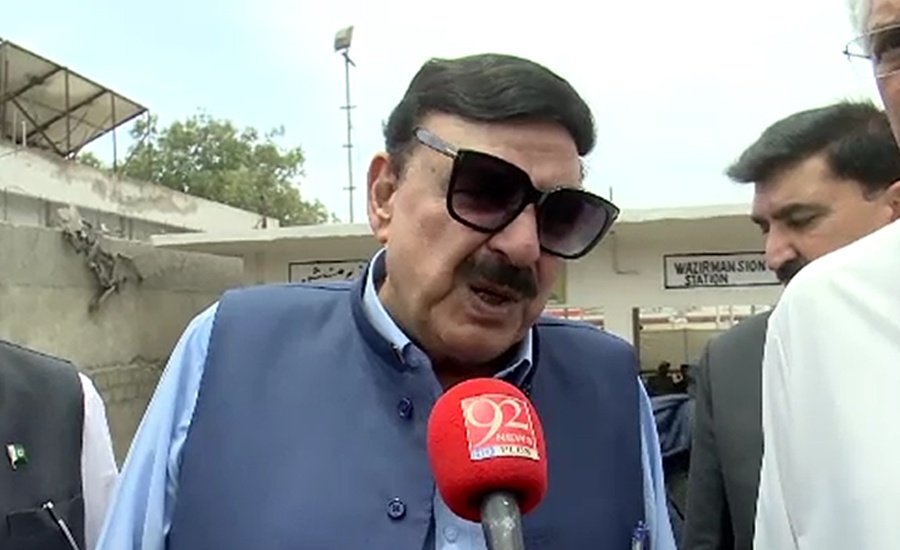 ISLAMABAD (92 News) – Federal Minister for Pakistan Railways Sheikh Rasheed on Wednesday said that Jamiat Ulema-e-Islam-F (JUI-F) chief Maulana Fazlur Rehman will also face resistance if he disrupts political system. Speaking to the journalists in Khairpur railway station, the federal minister said that Maulana Fazlur Rehman has no party and if he disrupts the political system, he would also face same resistance with himself. While bashing the opposition parties, he said that the Pakistan Muslim League-N (PML-N) has been already divided into two parts. He added that the Pakistan Peoples’ Party (PPP) is also facing worse condition. Sheikh Rasheed further said that the tough competition is being held on the seat of Senate chairman. He also hoped the victory of Sadiq Sanjrani on the seat of Senate chairman. The minister also expressed hope that the Pakistan Tehreek-e-Insaf (PTI) government will complete its five years tenure. Earlier, the railways minister arrived at Walhar Station and visited the place where Akbar Express collided with a freight train, killing 21 passengers and wounding several others. On July 27, Sheikh Rasheed said that the opposition’s small meetings pose no threat to the government. He said that currently the government only faces the challenge of economy. “The opposition had staged the worst failed meeting on July 25.” He said that the prime minister had categorically announced there would be no leniency towards thieves and dacoits. “The people who went to JUI-F chief Maulana Fazlur Rehman to seek support for the Senate chairman have been grilled,” he said. Sheikh Rasheed said that Prime Minister Imran Khan had opposed the war against Iran in the United States. He said that the removal of AC and stoppage of meal from home are petty issues. “The country has been looted and we have to answer to the people,” he added. The minister said that no train would be launched till the induction of new coaches. “In the past, millions of rupees have been spent on the stations where trains do not stop,” he said.