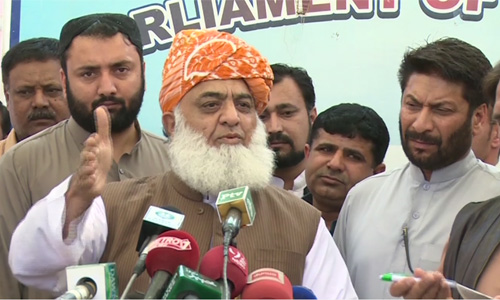 ISLAMABAD (92 News) – Maulana Fazul Rahman, chief of his faction of the Jamiat Ulema-e-Islam (JUI), has said that Pakistan’s role in the Yemen issue is serious. Talking to the media outside the Parliament House on Friday, he feared that conciliatory efforts with Houthis could fail. He said that Iran could be included in the talks with Houthis for peace in the region. “The worsening situation in Yemen could imperil the security of Haramain Shirafain.” He added that diplomatic efforts will be given preference in the Yemen issue. “Pakistan with other Islamic countries is capable of finding out the peaceful resolution of the Yemen issue.” The JUI-F chief said the resigned MPs had stated that they have resigned even if the judicial commission is formed. He added that the resigned PTI MNAs are sitting as strangers in the assembly.