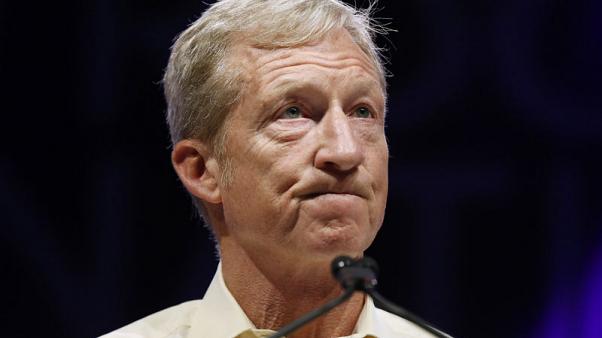 WASHINGTON (Reuters) - The FBI said it had recovered a second suspicious package addressed to California billionaire Tom Steyer, a Democrat known for funding ads calling for the impeachment of President Donald Trump. The Federal Bureau of Investigation said on Twitter it recovered a package on Thursday night that was similar to other recently mailed parcel bombs to prominent Democrats and critics of Trump. A 56-year-old Florida man, Cesar Sayoc, has been arrested and charged with mailing 15 pipe bombs. Law enforcement officials have warned Sayoc may have mailed other parcels before his arrest that could still be working their way through the US postal system. Last Friday Steyer’s office said a package addressed to him had been found at a post office outside of San Francisco. “These threats are not isolated but are a part of a larger assault on the norms that uphold our democracy. We will not relent as we push for the broadest possible democracy and a life of dignity and respect for every American,” Steyer said in a written statement of the latest package. Sayoc, a former male stripper, pizza delivery driver and disk jockey, agreed in a Miami court to be transferred to New York state to face five charges and a maximum penalty of 48 years in prison for allegedly sending the bombs to targets including former President Barack Obama.