FBI digs into US Supreme Court nominee Kavanaugh's past 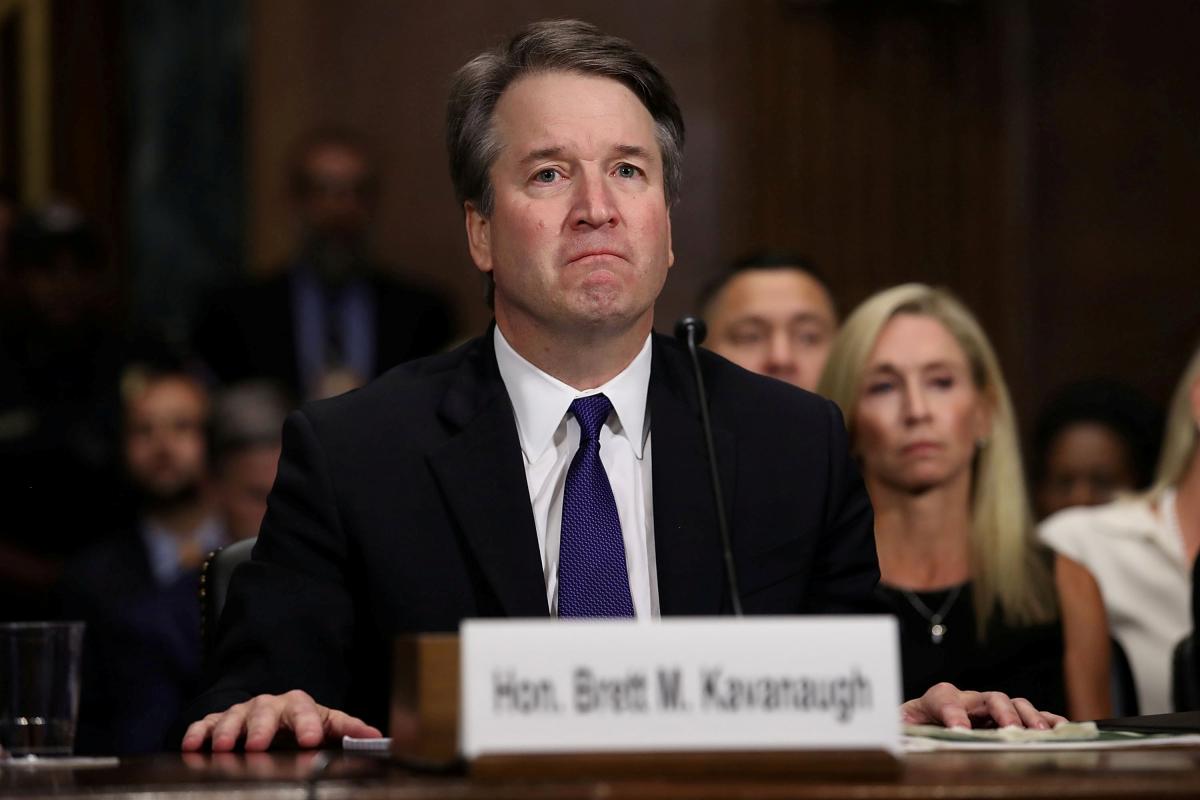 FBI digs into US Supreme Court nominee Kavanaugh's past

WASHINGTON (Reuters) - Days after being ordered to look into sexual misconduct allegations against US Supreme Court nominee Brett Kavanaugh, the FBI has talked with his high school friend Mark Judge, but the interview is not complete, his attorney said on Monday.
University professor Christine Blasey Ford has said Judge was a witness when Kavanaugh allegedly sexually assaulted her at a party in 1982 when they were high school students in Maryland. Judge has denied Ford’s allegations. Kavanaugh has also denied her accusations as well as those of two other women, while accusing Democrats of a political “hit.” Members of the Senate Judiciary Committee voted on Friday in favour of Kavanaugh’s nomination, but a full Senate vote on confirmation was delayed for a week after President Donald Trump bowed to pressure from moderate members of his Republican Party for the FBI probe. On Monday, the president, who nominated Kavanaugh to the top US court, said the FBI would have free rein to interview any witnesses it deemed necessary. He added he did not want the probe to become a “witch hunt” and that it should be completed quickly. “I want them to do a very comprehensive investigation. Whatever that means, according to the senators and the Republicans and the Republican majority, I want them to do that,” Trump said at a White House news conference. His remarks followed criticism by Democrats that he and other Republicans were trying to limit the scope of the FBI probe. Democratic Senator Chris Coons told reporters he was in discussions with the White House on the probe. He said: “The FBI needs to be allowed to pursue all reasonable investigatory steps from the credible allegations in front of the committee.” Senate Majority Leader Mitch McConnell said the chamber would vote this week on Kavanaugh, a conservative federal appeals court judge in Washington. A spokesman for McConnell declined to clarify whether McConnell was referring to procedural votes or a final vote on confirming Kavanaugh. The Kavanaugh nomination erupted last month into a major controversy that jeopardized an effort by Trump and his fellow Republicans to cement conservative dominance of the nation’s highest court and push America’s judiciary to the right. Coming just before Nov. 6 elections when control of Congress is at stake, the nomination has become a politically explosive issue, with some Republicans fearing that pushing ahead with confirmation would alienate women voters, while Democrats seek to capitalize.
‘WE REQUEST YOUR PATIENCE’
Judge’s attorney, Barbara “Biz” Van Gelder, said in a statement: “ Judge has been interviewed by the FBI but his interview has not been completed. We request your patience as the FBI completes its investigation.” Ford said during her testimony at a dramatic Senate hearing last Thursday that Judge was in the bedroom where the alleged assault by Kavanaugh occurred. She said Judge and Kavanaugh were both drunk at the time. Judge has written several books, including one titled “Wasted: Tales of a Gen X Drunk,” and one titled “God and Man at Georgetown Prep: How I Became a Catholic Despite 20 Years of Catholic Schooling.” He and Kavanaugh were classmates at Georgetown Preparatory School, an elite private school outside Washington. P.J. Smyth, identified by Ford as being at the gathering of teenagers where the alleged assault occurred, was interviewed by the FBI and again denied knowledge of the gathering or of improper conduct by his friend Kavanaugh, Smyth’s lawyers said.

Kavanaugh’s second accuser, Deborah Ramirez, has also been interviewed by the FBI, said Coons, who played a key role along with Republican Jeff Flake last week in winning the one-week Senate pause. Michael Avenatti, lawyer for the third woman, Julie Swetnick, told CNN on Monday that his client had not been contacted by the FBI. Nine of 10 Democrats on the Judiciary Committee wrote on Monday to FBI Director Christopher Wray and White House Counsel Don McGahn, listing 24 people they said should be interviewed by the FBI, and urging that the investigation assess all three allegations of sexual misconduct. Supreme Court nominations require Senate confirmation. Trump’s Republicans control the Senate by a 51-49 margin. That means if all the Democrats vote against Kavanaugh, Trump could not afford to have more than one Republican oppose his nominee, with Vice President Mike Pence casting a tiebreaking vote. Trump said he believed Kavanaugh did not lie during his Judiciary Committee testimony about the extent of his drinking in high school and college. On the other hand, Trump said, if the FBI uncovers something, “I’ll take that into consideration. I have a very open mind.” Trump did not elaborate. In a statement to media, Chad Ludington, a Yale classmate of Kavanaugh, said the judge was not truthful about his drinking during his Senate testimony last week and that at Yale, Kavanaugh was “a frequent drinker and a heavy drinker” who often got belligerent and aggressive when drunk.