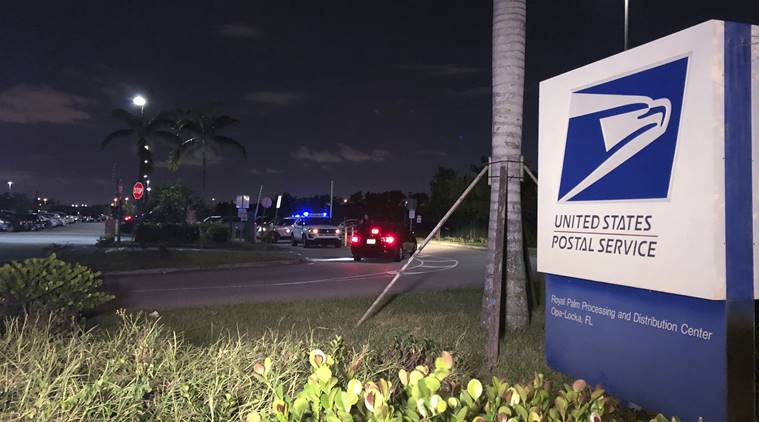 MIAMI (Reuters) - Federal agents searched a US mail facility near Miami on Thursday night racing to find who sent 10 pipe bombs to prominent Democrats and critics of US. President Donald Trump as leads pointed to Florida as the possible origin of the packages.
Investigators are treating the devices as “live” explosives, not a hoax, said James O’Neill, police commissioner of New York City, where two of the parcels have surfaced since the bomb scare began Monday with a device addressed to billionaire Democratic Party donor George Soros. A federal law enforcement source told Reuters the devices were thought to have been fashioned from bomb-making designs widely available on the internet. Investigators believe the packages, which were intercepted before reaching their intended recipients, all went through the US Postal Service at some point, that source said. None detonated and no one has been hurt. Authorities have branded the parcel bombs, coming less than two weeks before national elections that could alter the balance of power on Capitol Hill, as an act of terrorism, though they have declined to say whether the devices were built to be functional. Bomb experts and security analysts say that based on the rudimentary construction of the bombs it appeared they were more likely designed to sow fear rather than to kill. But the episode sparked an outcry from Trump’s critics who said his frequent expressions of inflammatory rhetoric against perceived enemies among Democrats and the press was stoking a climate ripe for politically motivated violence. After first calling for “unity” and civil discourse on Wednesday, Trump lashed out again Thursday at the “hateful” media, while his supporters accused Democrats of unfairly suggesting the president was to blame for the bomb scare.

Homeland Security Secretary Kirstjen Nielsen, in an interview with Fox News Channel, confirmed that Florida was the starting point for at least a portion of the bomb shipments. “Some of the packages went through the mail. They originated, some of them, from Florida,” she said. “I am confident that this person or people will be brought to justice.” A police bomb squad and canine units joined federal investigators on Thursday examining a U.S. mail distribution centre at Opa-Locka, northwest of Miami, Miami-Dade County police said. The sprawling warehouse, where authorities believe several of the parcels were processed, appeared to remain in operation during the search, with tractor-trailer traffic continuing to and from the facility as police were seen walking around the loading docks. On Wednesday, two days after the first package arrived at Soros’ home, the FBI identified five more targets - President Barack Obama, former Secretary of State Hillary Clinton, former Attorney General Eric Holder, former CIA director John Brennan, and California Representative Maxine Waters. Two packages were found addressed to her. Brennan’s package was sent in care of the Manhattan bureau of CNN, where he has appeared as an on-air analyst. On Thursday, the investigation widened with the discovery of three additional packages - two intended for former Vice President Joe Biden in his home state of Delaware and one for Hollywood actor Robert De Niro in Manhattan.

“It does remain possible that further packages have been or could be mailed,” William Sweeney, assistant director of the Federal Bureau of Investigation, told an afternoon news conference in New York. The FBI has said that at least five of the packages bore a return address for the Florida office of US Representative Debbie Wasserman Schultz, who formerly chaired the Democratic National Committee. Holder’s package ended up rerouted and delivered to the Wasserman Schultz return address. No one has claimed responsibility for the bombs, and the public was asked to report any tips. The parcels each consisted of a manila envelope with a bubble-wrap interior containing “potentially destructive devices,” the FBI said. Each was affixed with a computer-printed address label and six “forever” postage stamps, the agency said. Sweeney said all of the devices were being sent to the FBI’s crime lab in Quantico, Virginia, for analysis. Most of the intended recipients were high-profile Democrats and all were known to be outspoken critics of Trump, foils for his political rhetoric or both. Trump long questioned Obama’s U.S. citizenship and referred to Clinton, whom he defeated in the 2016 presidential race, as “crooked Hillary.” He has derided Waters publicly as “low-IQ Maxine.” The president revoked Brennan’s security clearance after the ex-CIA chief, a veteran intelligence official in Democratic and Republican administrations, lambasted Trump’s Russia summit performance as “nothing short of treasonous.” Biden once said he would have fought Trump if they were in high school, while De Niro received a loud ovation when he hurled an obscenity at Trump at the Tony Awards in June. At a Wisconsin rally on Wednesday night Trump, who has denounced news media organizations as an “enemy of the people,” called attention to “how nice I’m behaving tonight” but on Thursday morning he attacked the media again. “A very big part of the Anger we see today in our society is caused by the purposely false and inaccurate reporting of the Mainstream Media that I refer to as Fake News,” Trump wrote. “It has gotten so bad and hateful that it is beyond description. Mainstream Media must clean up its act, FAST!”