RAWALPINDI (92 News) – Frontier Corps (FC) Balochistan killed two terrorists during in intelligence-based operations (IBOs) at suspected hideouts of terrorists, the Inter-Services Public Relations (ISPR) said in his statement. According to ISPR, the raids were conducted in Kalat, Kharan and Maiwand areas of Balochistan under the Operation Raddul Fassad. Large quantity of arms and ammunition including sub-machine-guns, improvised explosive devices, grenades, mines, RPG-7 rockets and communication equipment were also recovered during the operations, the military’s media wing said in its statement. 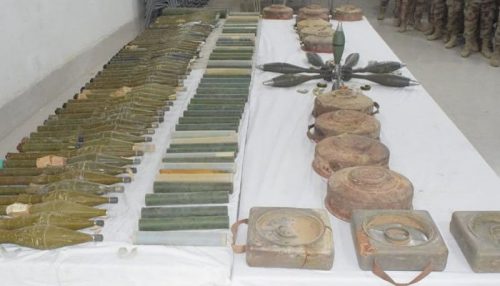 On last Friday, at least one terrorist was killed by security forces during an intelligence based operation (IBO) in North Waziristan.

On December 11, 2018, FC Balochistan recovered a cache of arms and ammunition from the suburbs of Sibbi, Balochistan. FC personnel recovered the cache during an intelligence-based operation (IBO. Recovered items included explosives, mortar shells, rockets, anti-tank mines and accessories used in explosions. The security forces intensified intelligence-based and combing operations in an effort to establish peace in Balochistan through operation Raddul Fasaad.

Earlier this week, the Pakistan Army shot down two Indian spy quadcopters along the line of control. The first one was struck down in Bagh sector at the LoC whereas the second one was shot down in Satwal sector. “Not even a quadcopter will be allowed to cross LOC, Inshaa Allah,” said Director General ISPR Asif Ghafoor. Read More: Indian army chief confesses for spying on LOC at Pakistani boundaries