ISLAMABAD (92 News) – Prime Minister (PM) Imran Khan on Tuesday said that said the ongoing accountability drive will rid the nation of corruption, adding that the fear of accountability have been vansished due to the previous National Reconciliation Ordinances (NROs). Speaking at the inauguration ceremony of the Railway Live tracking system and Thal Express Train service at the Prime Minister’s House, the premier lamented that in previous governments policies were designed to benefit the elite class only. Imran Khan said loot and plundering of wealth in past harmed the national economy. He said due to NRO 1 and NRO 2, the fear of accountability had vanished. “Our loans jumped to 30,000 billion rupees from 6,000 billion due to corruption and impunity from accountability,” he added. PM Khan said he desired to send Pakistanis for Hajj free of charge if the country did not have prevailing shortcomings. He reiterated his government’s resolve to devise people-friendly policies on priority basis to take masses out of poverty. The prime minister said that the PTI government is implementing its agenda of the welfare of common man. He said that uplift of the trains system of Pakistan Railways will be taken with the cooperation of China. Imran Khan said China is far ahead of other countries in development of train systems and like other areas, we will also seek their cooperation in railways sector to make Pakistan Railways modern and customer friendly passenger service. PM Khan also said the government is bringing down expenditures at all levels, mentioning that in the PM House alone costs had been slashed by 30 per cent. “Lavish dinners would be hosted here, but you can all see a drastic change here,” he said. The prime minister said he directed all ministries to cut costs, adding, “If I can cut costs by 30 per cent the onus is on other ministries to at least slash their expenditures by 10 per cent.” He further said that all office holders have a responsibility as this is not their personal wealth but belongs to the people of Pakistan. About the increase in gas prices, PM Khan said the government was compelled to increase gas prices as the industry suffered immense losses as well as theft. The PM concluded that foreign investment is coming to Pakistan and the future is bright for the country. 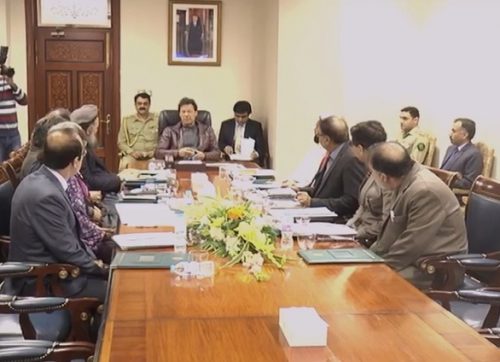 Earlier today, PM Imran Khan chaired a meeting to review progress on utilization of Auqaf and Evacuee Trust properties for welfare purposes. The meeting reviewed progress on optimum use of these properties for public welfare projects regarding education, health, shelter homes and public parks. The premier also chaired another meeting regarding allowing construction of high rise buildings in the federal capital.