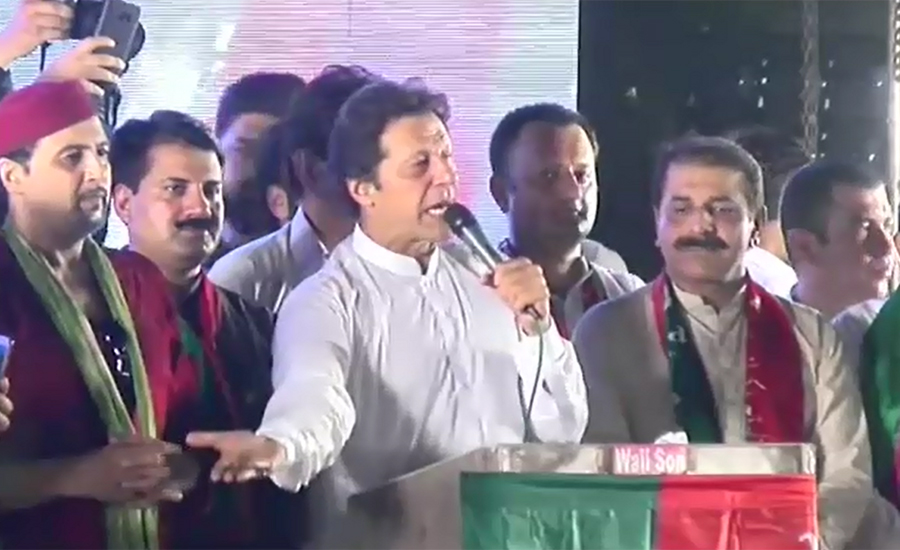 LAHORE (92 News) – PTI chairman Imran Khan has said that fear is visible on the face of PML-N president Shehbaz Sharif. Addressing gatherings on the last day of the campaigning on Monday, he said that InshAllah they are seeing the rise of a new dawn and a Naya Pakistan will rise with your help and determination on July 25. “It is your duty to be at polling stations. Sleep early, get to the polling stations early and polling agents don’t leave till results are counted. Women have a very important role to play in the making of Naya Pakistan. You are the ones who are dealing with these excruciating expenses in your home,” he urged the workers. He asked the workers to mobilize the masses on July 25 and vote for the bat. “I take the responsibility, if any PTI representative does anything dishonest I will personally send him/her to jail. July 25 is when we will become a nation, when all our provinces think as one nation, when all of us, different minorities along with us, will work as one nation.” Imran Khan said that roads and bridges can be built by anyone. “Leaders do nation-building. They bring people together. Pakistan itself is the gift of a leader who brought people together on an ideology, not on roads and bridges,” he maintained. “Did you ever see Mahathir Mohammad, Nelson Mandela or even Quaid-e-Azam cutting ribbons to roads and bridges? If that’s the case then any contractor can be celebrated!” He said that the PML-N is crying that Nawaz sharif is being bitten by mosquitoes in jail. “The inflation that has come in the last 10 years is four-time over whether it is electricity, gas, or basic kitchen items. People are not even able to feed themselves properly. And on the other hand, they are spinning sad stories from jail. The ones who were caught red-handed stealing 300 billion; because of whom children starve and mothers cannot get basic milk for their children. For my youth and children; nations are never built on the basis of roads and bridges. This is what they are spinning in their advertisements,” he said. “To the children of Pakistan, this is the most important election where all the status quo parties have joined up together against the PTI. So kids even though you cannot vote; your duty is to prepare your families to vote,” he said.