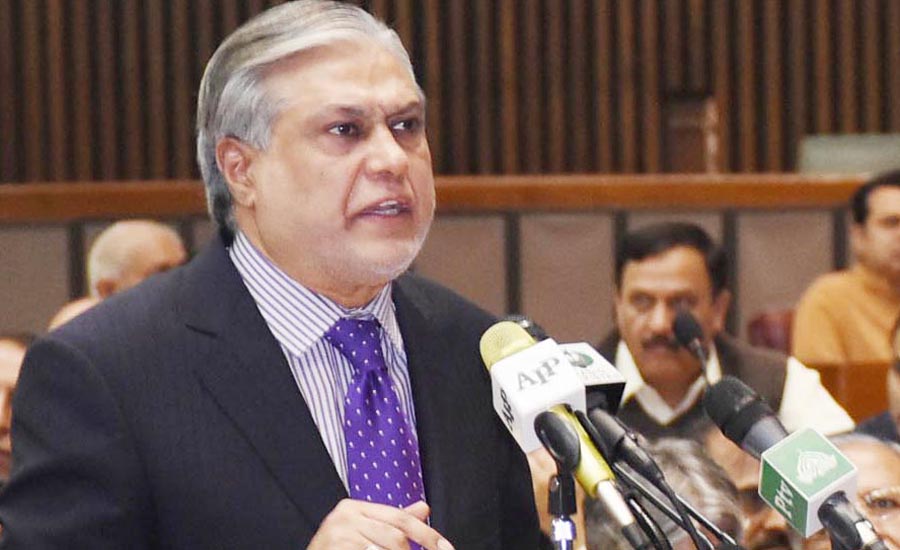 The expenditures have been estimated at Rs 3,763 billion. An amount of Rs 226 billion has been fixed to pay loans. A sum of Rs 132 billion will be paid under the head of mark-up.

The government will get loans of Rs 390 billion during the year. An amount of Rs 920 billion has been allocated for defence, while Rs 12.84 billion and Rs 90.51 billion for the health and education sectors. A sum of Rs 1,001 billion has been reserved for development budget.

A proposal to allocate Rs 121 billion has been reserved for the Benazir Income Support Program. Rs 180 billion will be spent on the CPEC budget.

An amount of Rs 42.9 billion has been allocated to improve the railways, while Rs 30 billion and Rs 26 billion have been fixed for the clean water projects and development of the FATA.

A sum of Rs 401 billion will be spent on the power projects, while Rs 77 billion and Rs 20 billion have been reserved for the LNG and laptops scheme.

The government has imposed 5 percent regulatory duty on over 300 items. A subsidy has been given in the GST on fertilizers, while a 10 percent increase has been announced in the salaries and pensions of the government employees.

The finance minister announced a new national saving scheme for the welfare of family members of the martyrs. Under the scheme, heirs of martyrs of Pakistan Army, police and other security agencies will get an extra profit.

He also announced relief measures relating to Sales Tax and Federal Excise Duty for different sectors of economy. These include elimination of additional tax on lubricant oil by marketing companies, reduction in Sales Tax rates on import of hybrid electric vehicles at par with locally manufactured vehicles, automatic stay in cases related to federal excise duty till decision of appeal and elimination of withholding tax on supplies between registered individuals.

The minister announced revival of the scheme launched by PML-N government in 1999 envisaging payment of all dues of HBFC mortgage by the widows. The limit of loan for this scheme has been increased from Rs 300,000 to Rs 500,000.

Customs duty of 11 percent and 16 percent imposed on telecommunication equipment are being abolished and replaced with a uniformed 9 percent regulatory duty.

The minister announced withdrawal of fixed tax per unit on builders and developers.

He said the rate of withholding tax for non-filers would be increased on contracts, sales, and services, payments to nonresidents, rental income, prize bonds, lottery, commission, auction, gas bills for CNG stations and sales by industrialists and importers to distributors, dealers, and wholesalers. However, the existing rates for filers would continue without any change.

The rate of withholding tax on dealers, distributors and wholesalers on electronic goods is being increased from the existing 0.5 percent to one percent.

The minister said federal excise duty on cement is proposed to be increased from Re one per kilogram to Rs 1,25 paisa per kilogram.

Sales tax on commercial imports of cloth is being increased to six percent to provide a healthy competitive environment for the local industry. Federal Excise Duty on cigarette has also been increased marginally. In order to rationalize the rate of sales tax on steel sector, the existing rate of electricity is being increased from Rs nine per unit to Rs 10.5 per unit.

Meanwhile, the opposition members resorted to hooliganism during the budgetary speech and tore the budget copies.

Before the Ishaq Dar’s speech, Opposition Leader in the National Assembly Syed Khurshid Shah tried to make the speech and continued to speak despite being stopped by Speaker Sardar Ayaz Sadiq.

The opposition members staged a walkout, but returned after sometime.