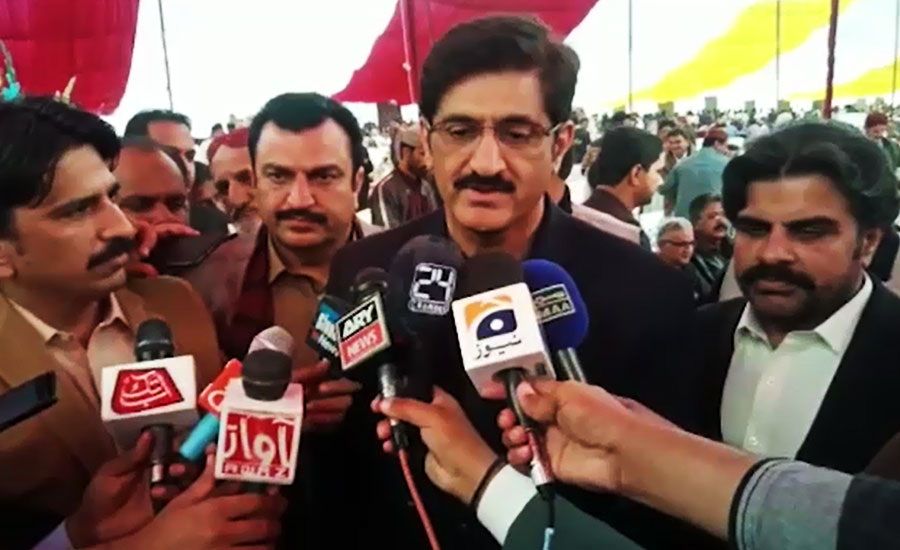 GHOTKI (92 News) – Sindh Chief Minister Murad Ali Shah advised on Sunday that the Pakistan Teheek-e-Insaf led federal and provincial governments should play its constitutional role. Talking to the journalists, the Sindh chief minister said that the PTI-led government would complete its five-year term in power if it plays its constitutional role. Murad Ali shah said that the economy of country is facing diverse condition in presence of incumbent government. He also claimed that no one is happy with the policy of the government. He mentioned that the federal government is still not understand the country’s constitution. The provincial minister said that the federal Ministers were busy to criticize the opponents. “We are doing progressive work in Sindh but not claiming of work only, he explained. On Jan 17, Former president and Pakistan Peoples’ Party (PPP) co-chairman Asif Ali Zardari predicted that Prime Minister (PM) Imran Khan would not complete his five years’ tenure. Addressing a public gathering in Badin, Zardari claimed that surely PM Imran Khan must not complete his tenure of five years. He also mentioned that the people from all the provinces refused to accept the election results. “Listen everyone in Pakistan! Imran Khan would not complete his term,” the PPP co-chairman said. You should learn to govern if you have accidentally become a prime minister. Learn how to run a country,” he advised the prime minister.

Earlier on Jan 23, the Supreme Court on Wednesday dismissed a plea seeking disqualification of Sindh Chief Minister Syed Murad Ali Shah.  A three-member bench headed by Justice Umar Atta Bandial heard the plea. The plea was filed on the basis of dual nationality and ‘Iqama’. The returning officer had also dismissed the plea for disqualification of Syed Murad Ali Shah. Justice Muneeb Akhtar observed that the petitioner has not challenged the order of the returning officer at the legal forum. “Why did the petitioner file the petition despite having a proper forum?. It does not happen that a petition is filed to remove a man from a designation suddenly,” he observed. The court observed that the petitioner is a political rival of Murad Ali Shah. “The dismissal of the petition in the High Court is justified,” he added.