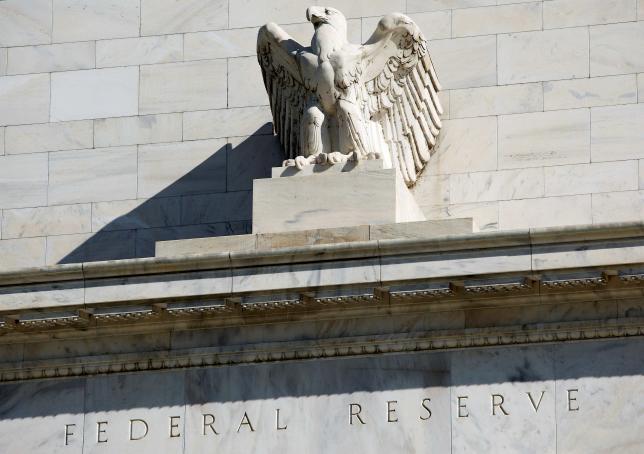 WASHINGTON - The Federal Reserve left interest rates unchanged but said near-term risks to the US economic outlook had diminished, opening the door to a resumption of monetary policy tightening this year. The US central bank said the economy had expanded at a moderate rate and job gains were strong in June. It added that household spending also had been "growing strongly," and pointed to an increase in labour utilization. While Fed policymakers said they continued to closely monitor inflation data and global economic and financial developments, they indicated less worry about possible shocks that could push the economy off course. "Near-term risks to the economic outlook have diminished," the Fed's policy-setting committee said in its statement following a two-day meeting in which it left its benchmark overnight interest rate in a range of 0.25 percent to 0.50 percent. The Fed noted, however, that inflation expectations were on balance little changed in recent months, and gave no firm indication of whether it would raise rates at its next policy meeting in September. Most Fed policymakers had urged caution in raising rates until there was concrete progress in moving inflation towards the central bank's 2 percent target "It's a little bit more hawkish, but not much," said Walter Todd, chief investment officer at Greenwood Capital Associates in South Carolina. The Fed's preferred inflation rate currently stands at 1.6 percent and has been below target for more than four years. US Treasury prices pared gains after the Fed's decision, while the US dollar briefly strengthened against the euro and yen. US stocks extended declines before later reversing course to trade largely flat in the session. Federal funds futures implied traders still see roughly even odds of a rate increase at the Fed's December meeting and about a 20 percent chance of such a move in September, a bit lower than before the decision, according to CME's FedWatch Group. The policy-setting committee will also meet at the beginning of November, but a rate hike at that time is generally seen as unlikely because it would occur a week before the US presidential election. A Reuters poll of economists suggested the Fed is most likely to wait until December to raise rates. "There wasn't any tip that the Fed will raise rates in September," said Mike Materasso, co-chair of Franklin Templeton's fixed income policy committee in New York. "A rate increase is warranted this year, most likely at the end of the year, but a lot has to do with a benign world arena." Kansas City Fed President Esther George was the only policymaker to dissent at this week's meeting. She has favoured raising rates at three of the last four meetings. FOCUS ON DATA, YELLEN The Fed has held steady on rates since December, when it raised them for the first time in nearly a decade and signalled another four rate increases were in the offing for 2016. That was scaled back to two hikes this year after central bank policymakers issued new projections in which they also lowered their longer-term growth estimates for the US economy. A global economic slowdown, financial market volatility and uncertainty over the impact of Britain's June vote to leave the European Union have repeatedly forced the Fed to delay another rate increase. The US economy, however, has suffered little initial impact from the so-called 'Brexit' vote. A string of better-than-expected economic data recently as well as an easing in financial conditions also have calmed nerves. Fed officials will now turn their attention to this Friday's first initial estimate of US gross domestic product for the second quarter, which is expected to show a healthy rebound from the previous quarter. The economy likely expanded at a 2.3 percent annualised rate during the second quarter, according to the Atlanta Federal Reserve's latest forecast. The closely-watched US monthly employment report will be issued on Aug. 5, followed three weeks later by a speech from Fed Chair Janet Yellen at the annual central banking conference in Jackson Hole, Wyoming. Fed policymakers have used the conference to give major steers on central bank policy. -Reuters