Federer begins road to 100 with a win in Paris 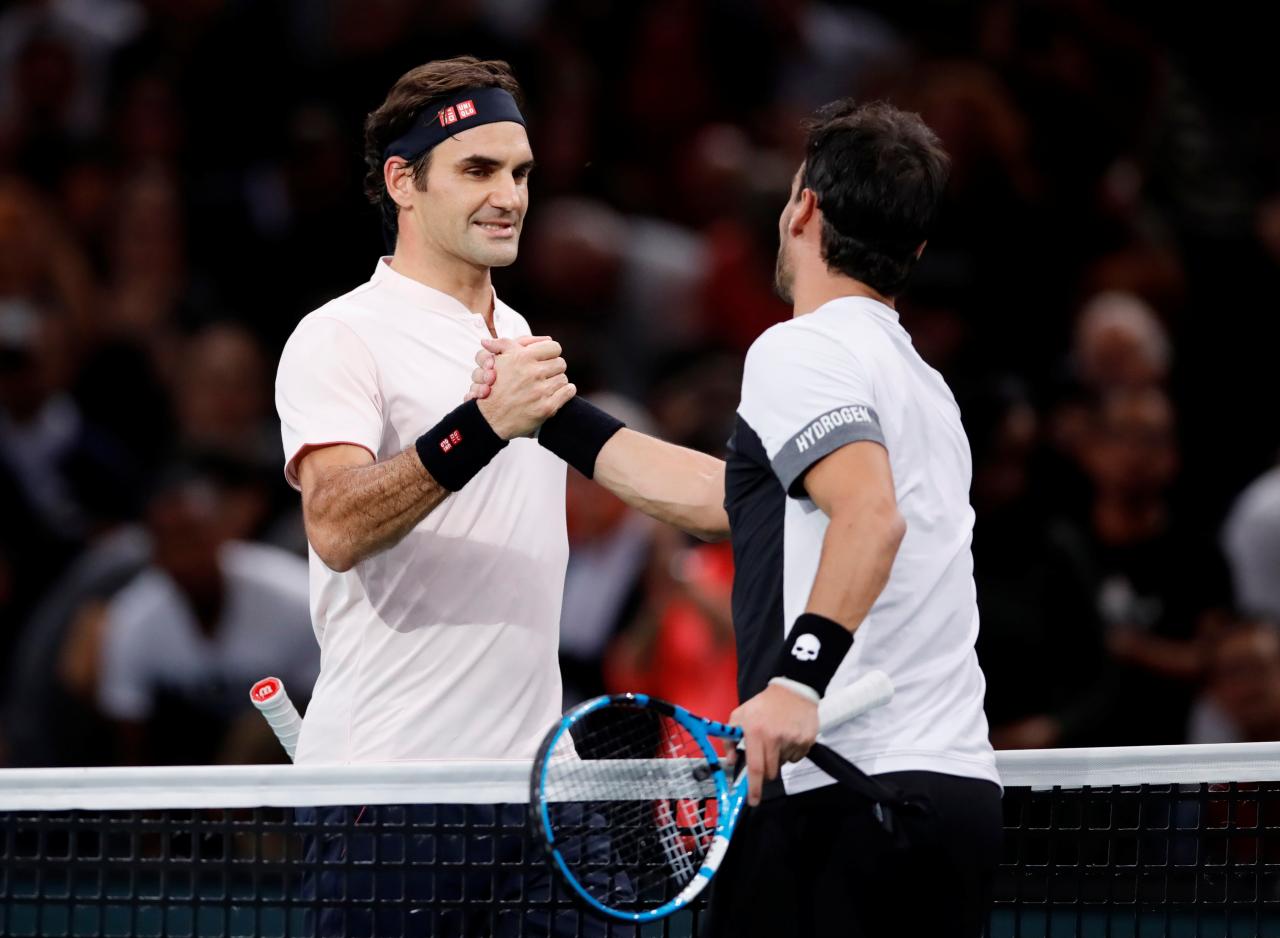 Federer begins road to 100 with a win in Paris

PARIS (Reuters) - Roger Federer made a comfortable start to his quest for a 100th title, despatching Fabio Fognini in straight sets to ease into the quarter-finals at the Paris Masters on Thursday. The 37-year-old Swiss had only made a late decision to compete in Bercy after winning his 99th title in his home town Basel on Sunday but, despite a touch of raggedness, was sharp enough to outclass the Italian 6-4 6-3 in his opening match. Federer’s procession came after Novak Djokovic celebrated his return to the summit of world tennis with an even easier stroll into the last eight after Damir Dzumhur had to retire injured in the second set of their third round clash. Federer’s return to Bercy for the first time in three years delighted his vast Parisian fan club, who gave him a standing ovation that clearly moved the 20-time grand slam winner. The Swiss was not at his regal best against the flamboyant Fognini, who calls Federer “the king of tennis”, but then he did not need to be. “Not bad,” was how the Swiss rated his display. He broke twice in the first five games, prompting the explosive Fognini to hurl down his racket in disgust, but the Italian did claw a break back before the 2011 Paris champion made slightly heavy weather of serving out the set. After some erratic tennis in the second set, Federer completed the routine job with a fourth break of serve to wrap up a 73-minute win but knows it will all be much harder in the last eight against Kei Nishikori, who beat Kevin Anderson. In a repeat of Sunday’s Vienna Open final, the in-form Japanese Nishikori gained impressive revenge for his defeat by beating the South African 6-4 6-4.

Djokovic, who knew on Wednesday he would be world number one next week after Rafa Nadal’s withdrawal from the tournament through injury, was leading 6-1 2-1 when Bosnian Dzhumur succumbed to a back problem that had flared up in the first set. Djokovic extended his winning streak to 20 straight matches as he maintained the remarkable spell of form that helped him rise from number 22 in June to the top of the game again. “Reflecting on what I’ve been through in the last year, it’s quite a phenomenal achievement. And, of course, I’m very, very happy and proud about it,” the Serb told reporters. Dzumhur suffered a tweak to his lower back when 4-1 down in the opening set. He battled on in an 11-minute sixth game but was eventually broken for a second time and, though he continued after treatment and taking pain-killers, there was no way back. Seeking a record-equalling 33rd Masters and record-extending fifth Paris title, Djokovic will face a much tougher test in the last eight against Marin Cilic, who looked in strikingly good form when beating Grigor Dimitrov 7-6(5) 6-4. Cilic, who moved closer to securing a place at the ATP Finals in London, beat Djokovic here at the same stage two years ago and also in this year’s Queen’s final before Wimbledon.

Nishikori could still make the London party but John Isner’s hopes received a potentially fatal blow when he was beaten 6-4 6-7(9) 7-6(8) by rising Russian Karen Khachanov. The giant American saved four match points before the 22-year-old Khachanov, who had already staved off two himself, finally threaded a backhand winner past the net-rushing Isner to win after nearly 2-1/2 hours of massive hitting. In the quarter-finals, Khachanov will meet Germany’s fourth seed Alexander Zverev, who subdued the scurrying defiance of Argentina’s Diego Schwartzman 6-4 6-2. In a high-quality contest between two other players seeking a London berth, Dominic Thiem, back in the city where he reached the French Open final, ended Borna Coric’s slim hopes while boosting his own with a 6-7(3) 6-2 7-5 win. The Austrian will next face a rejuvenated Jack Sock after the defending champion, who has endured a dramatic slump in the year since, outplayed Tunisian lucky loser Malek Jaziri 6-0 6-4 to win back-to-back matches for the first time in 2018.