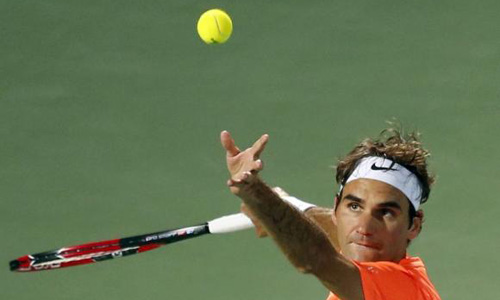 DUBAI (Reuters) - Roger Federer eased to a 16th consecutive victory over Russia's Mikhail Youzhny to begin his quest for a seventh title at the Dubai Championships on Monday. The Swiss world number two looked revitalized during a 6-3 6-1 stroll -- his first competitive match since a surprise third round defeat by Andreas Seppi at the Australian Open. Only two head-to-head winning streaks are longer than Federer's over Youzhny -- Ivan Lendl's against Tim Mayotte (17) and Rafa Nadal's recently broken one against Tomas Berdych (18) -- and Youzhny looked resigned to his fate. Federer banged down eight aces during a 56-minute exhibition and will face the winner of an all-Spanish clash between Fernando Verdasco and Guillermo Garcia-Lopez in round two. Joining the 33-year-old in the second round of the high-profile event was Denis Istomin who removed struggling fifth seed Ernests Gulbis 7-5 6-2.