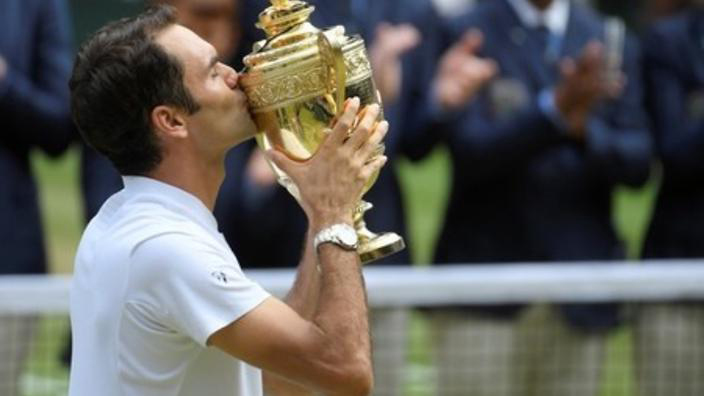 The Swiss maestro, appearing in his 11th Wimbledon final, was challenged early on but once he broke a nervous Cilic in the fifth game of the opening set the match became a no-contest.

Not that Federer was concerned as, 23 days before his 36th birthday, the father of four became the oldest men's singles champion at Wimbledon in the professional era -- doing so without dropping a set throughout a glorious fortnight.

For Cilic, his first final on Centre Court became a nightmare broadcast to hundreds of millions around the globe.

After a reasonably solid start he became discombobulated and after falling 3-0 behind in the second set he slumped on his courtside chair and could be seen sobbing as a physio and tournament referee attended him.

For a moment it looked as though the final might end in a retirement for the first time since 1911.

Given sympathetic cheers by the Federer-favoring 15,000 crowd, the 28-year-old managed to regain his composure but there was no chance of Federer letting up as he accelerated toward a record-extending 19th grand slam title.

Cilic required a medical timeout after surrendering the second set in 25 minutes -- a problem apparently with his foot -- but it was his spirit that appeared broken.

Federer was unrelenting and with Cilic's brain still out of contact with his legs, the Swiss third seed broke in the seventh game of the third set as his opponent crashed yet another groundstroke into the net.

The end came quickly as Federer served at 5-4 to regain the title he cherishes above all others. He missed a first match point when a forehand went wide but converted the second with his eighth ace of the match.