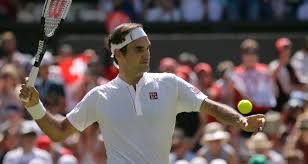 TORONTO (Reuters) - World number two Roger Federer has withdrawn from next month’s Rogers Cup in Toronto as part of his ongoing strategy to lighten his schedule and conserve energy for the top events, tournament organisers said on Monday. The decision by the 36-year-old Swiss, who was stunned in the final of last year’s Rogers Cup in Montreal by German Alexander Zverev, comes less than two weeks after his quarter-final loss at Wimbledon. “I had a fantastic time in Montreal last year and always enjoy playing in front of the Canadian fans, but unfortunately with scheduling being the key to my longevity moving forward, I have regrettably decided to withdraw from Toronto this year,” Federer said in a statement issued by organisers. “I wish the tournament every success and am sorry to miss it.” The Aug. 4-12 Rogers Cup will include nine of the top 10 players on the ATP World Tour, including world number one and three-time champion Rafael Nadal and Wimbledon champion and four-time winner Novak Djokovic.