Feet: the foundation for fitness and health 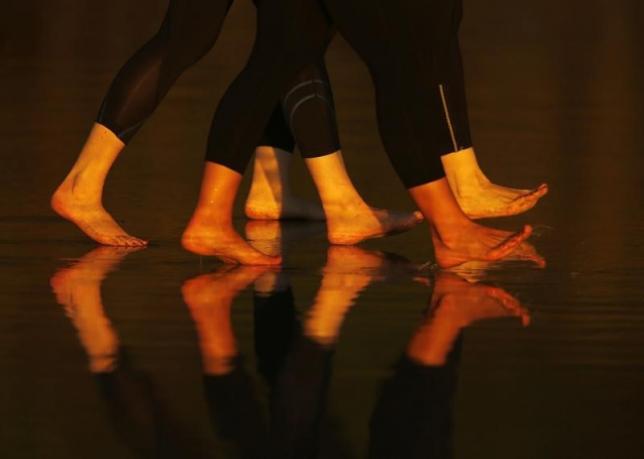 Feet: the foundation for fitness and health

NEW YORK - Feet are a part of the anatomy many exercisers ignore while pounding the treadmill or honing a headstand, but fitness experts say they are the very foundation of physical well-being. A quarter of the body's bones are contained in the feet and ankles. It is where most movement begins and, much like a building’s foundation, it determines stability. “The feet are perhaps the most neglected complex structure in the body,” said Katy Bowman, biomechanist and the author of “Whole Body Barefoot: Transitioning Well to Minimal Footwear.” Bowman, founder and director of the Restorative Exercise Institute near Seattle, Washington, said when feet are strengthened it decreases whole body imbalance or instability. Almost eight in 10 adult Americans have experienced a foot problem, according to a 2014 survey by the American Podiatric Medical Association (APMA). The poll also showed that one in four adults was unable to exercise because of foot pain. Dr. Howard Osterman, an APMA spokesman, said most foot injuries are due to overuse, or trying to do too much with limited support. “We don’t need the toes to have the dexterity of fingers but we do need some dexterity,” he said. “We need the muscles to have strength." As a podiatric consultant to the Washington Wizards professional basketball team, Osterman recommends that team trainers make sure players do their foot exercises religiously. Simply trying to pick up a washcloth, towel or marbles with the feet fires up the muscles that build arch strength, he said. Standing on one foot for 10 seconds is also a good way to build core strength. “(It) stimulates the nerve endings from the brain down to the small nerves in the feet,” he said. “It’s especially important to train the brain of elderly people at a greater risk of falls.” Bowman suggests doing exercises such as spreading, pointing and individually lifting the toes, rolling a tennis ball underfoot, and standing on tiptoe to strengthen the calves. “For the fit person, give yourself a 15-minute foot exercise routine that you do without your shoes,” she recommends. Bowman believes foot fitness is integral to every movement. “Every exerciser is worried about the position of their ankles, knees and hips, but so much of that stability starts at the foot,” she said. “It’s very much a whole body issue.” - Reuters