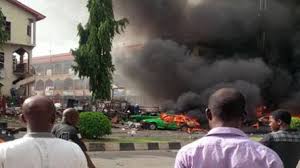 DAMATURU (Reuters) - A female suicide bomber blew herself up at a crowded bus station in the northeast Nigerian city of Damaturu on Sunday, killing 10 people and wounded 30, police said, in a region that is frequently attacked by Islamist militants. Witness Adamu Muhammad said he heard a loud blast and the people at the Damaturu's central motor park "descended into panic."