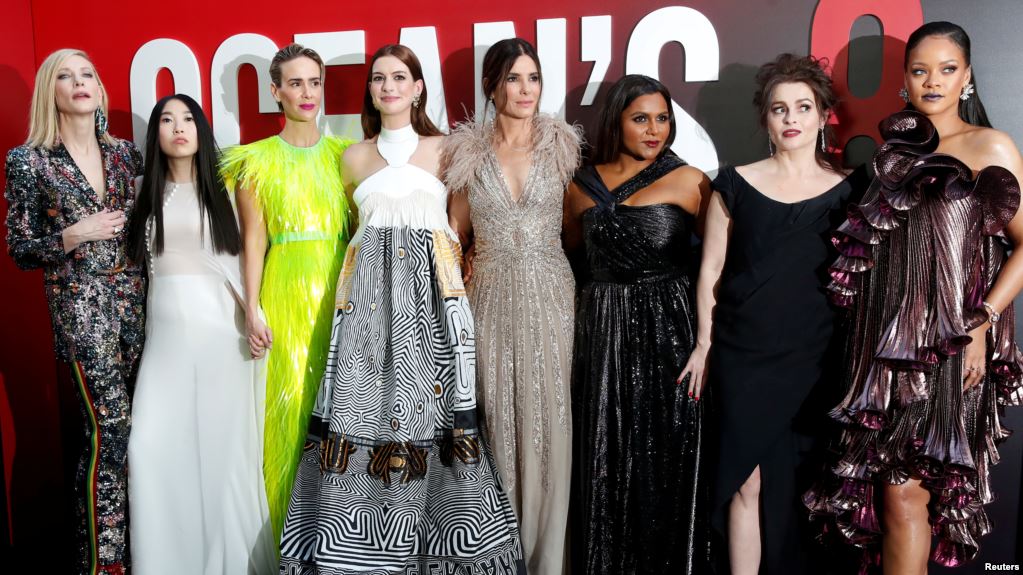 NEW YORK (Reuters) - For some, the female heist caper “Ocean’s 8” is a strike at the heart of male-dominated Hollywood. For others, it’s pure summer escapism, and for a (mostly male) minority it’s the worst idea ever. The “Ocean’s 8” cast of Sandra Bullock, Cate Blanchett, Rihanna, Anne Hathaway, Mindy Kaling, Helena Bonham Carter, Sarah Paulson and rising star Awkwafina have four Oscars, two Emmys, nine Grammys and five Golden Globes between them. Their spin-off version of the 2001 “Ocean’s Eleven” franchise starring George Clooney has raised the stakes for women seeking to reverse power dynamics in Hollywood. The Warner Bros. movie, opening in US theaters on Friday, tells of Debbie Ocean (Bullock), who upon her release from prison puts together a team of female crooks to steal a $150 million necklace during New York City’s annual Met Gala. “Warner Brothers made this movie before the whole movement,” Bullock said. “It wasn’t so much eight women, but they said this is a franchise that can keep going. What’s a fresh way of looking at the franchise? It’s with the ladies.” The movie is expected to take a healthy $30-$40 million on its opening weekend in North America, according to box office analysts, despite mixed reviews and a social media backlash. Trailers were met with derisory comments. “How to ruin a classic franchise,” wrote a user called Handsome Stalker on YouTube. “The feminists are taking over,” said user Jamie Vardy Vulture film critic Emily Yoshidi said that although the movie was seen as “symbolic balm for all the ills of a male-dominated Hollywood,” the finished version “doesn’t feel like much more than a thrown bone.” Variety’s Owen Gleiberman, by contrast, called it “a gender-flipped sequel that not only works just fine, but renders the whole novelty of the concept a borderline irrelevance.” Hathaway said she hopes gender politics will not distract audiences. “The fact that eight women are starring together in a movie feels very big - because it is - and powerful and in some ways political. But the movie is a comedy... And it’s stylish and spirited,” she said. Working with an all-female cast certainly made an impact on the seasoned actresses. Kaling called the experience “surprising.” Paulson described it as “fun” and Hathaway said it was “about time.”