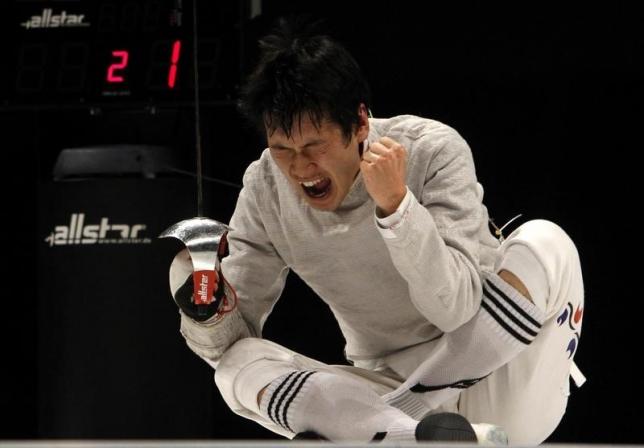 SEOUL - Fencer Gu Bon-gil will carry the South Korean flag at the opening ceremony of the Rio de Janiero Games, the Korean Olympic Committee said on Tuesday. The world number four won gold in the men's team saber at the 2012 London Games and was a silver medallist in the team and individual events at the 2014 World Championships in Kazan, Russia. The KOC also named 43-year-old handball goalkeeper Oh Yong-ran captain of the women's delegation while three-time Olympic shooting gold medallist Jin Jong-oh will represent the men. Jin will also carry the flag when the South Korean delegation leaves for Rio on July 27, the KOC added. Jin will be competing in his fourth Olympics and the 36-year-old said his experience was probably the reason he was made captain. "I always wondered who gets to be the flagbearer or the team captain at the Olympics or the Asian Games," he was quoted as saying by Yonhap news agency. "I guess I was made a captain since I have been around the scene for a while." South Korea has targeted at least 10 gold medals in Rio to finish in the top 10 of the medal standings for a fourth successive Olympics. The Koreans tallied 13 golds at the 2008 Beijing Games, their most at an Olympics, and matched that total in London four years later, where they finished fifth in the standings. The country is sending 204 athletes to Rio, well down on the 248 it sent to London four years ago and the 267 it dispatched to Beijing. -Reuters