Ferrari upbeat after bright start Down Under 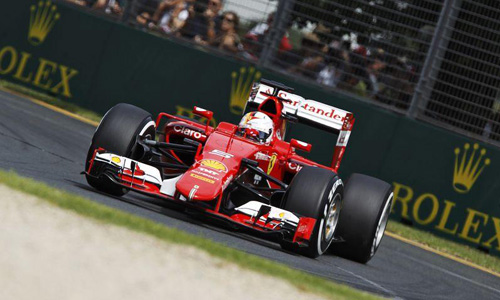 Ferrari upbeat after bright start Down Under

MELBOURNE (Reuters) - Things are starting to look brighter for Ferrari even before the first race of the Formula One season, and it is about time. After a dismal year, when the Italian team failed to win a single Grand Prix for the first time since 1993, 2015 could only get better. The early signs have been encouraging. On Saturday, Sebastian Vettel qualified fourth for the Australian opener while team mate Kimi Raikkonen was fifth. With five world championships between them, the Ferrari drivers know what it takes to win. Both are excited by the improvement Ferrari has shown but too streetsmart to get carried away just yet. "Let’s keep our feet on the ground," said Vettel. "So far this weekend, it’s gone well and we’ve had no problems with the car. "It’s a shame that third place escaped us, as that would have made us the first team behind Mercedes, but it wasn’t by much and, after all the race is tomorrow." Mercedes still have a big advantage over the rest, but Ferrari are in the mix behind them. Four times world champion Vettel, who joined Ferrari this season from Red Bull, said he might have qualified higher but for a mistake. "We lost third place because my first run wasn’t quick enough. I’m not very pleased with myself, because there was still some performance to be found," he said. "First and second are a long way in front, but the race is tomorrow and anything can happen during the Grand Prix. "A podium? There’s not much of a gap between third and fourth on the grid, so I think the podium is a realistic goal and that’s what we have to aim for." Raikkonen also admitted to errors but, like Vettel, was pleased at the way things were going. "During free practice, we saw that our long runs are pretty good, so we can be confident of having a good race," said the Finn, the last Ferrari driver to win a world title in 2007. "All we need to do is get a good start and then give it our best, but I think we can fight for a good position. As a team, we are working well together and we have a pretty clear picture of the situation. "We know we are quick, but we need to improve in all sectors and, as for myself, I have to drive better."