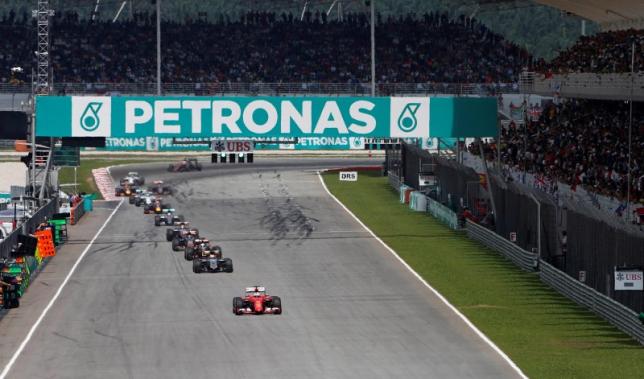 SEPANG, MALAYSIA - Sebastian Vettel showed again that form is temporary and class permanent when the four-times world champion put in a faultless display to record his first victory for Ferrari at the Malaysian Grand Prix on Sunday. The triumph ended a long drought for Formula One's most successful team, whose last win was at the Spanish Grand Prix in 2013, and was the 40th of the German's career. Starting from second place on the grid behind Lewis Hamilton's seemingly unbeatable Mercedes, Vettel and Ferrari produced a tactical masterclass to overhaul the Briton and cross the line 8.5 seconds ahead of the double world champion. "Numero uno is back, Ferrari is back," Vettel was told over the team radio as he took the chequered flag. [caption id="attachment_12409" align="alignnone" width="500"] 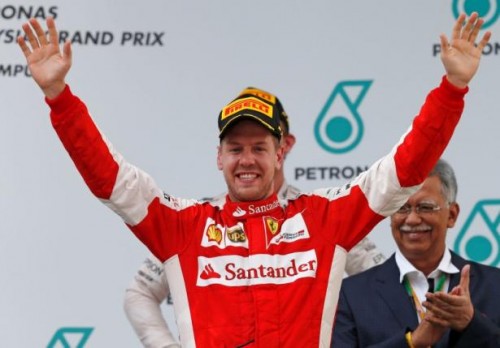 Ferrari's Sebastian Vettel celebrates winning the Malaysian Grand Prix on the podium. Reuters[/caption]   "Grazie, grazie. Forza Ferrari" he shouted in reply as he celebrated his fourth win at Sepang, a circuit that has favoured the Italian team over the years with seven victories in 17 editions since 1999. Hamilton's team mate Nico Rosberg finished a distant third while 17-year-old Max Verstappen claimed seventh place for Toro Rosso to become the youngest ever points scorer in Formula One history. After Mercedes dominated last season and looked further ahead of the pack when Hamilton led a one-two in Australia two weeks ago, the rest of the field appeared to be even further behind in the second year of the V6 hybrid engines. Vettel had cut a forlorn figure in his last season at Red Bull in 2014, unable to record a victory and way off the pace of the front runners. He agreed to join a stuttering Ferrari last year, replacing Spin's double world champion Fernando Alonso, and the union appears to have revitalized both of them. Third in Australia but some way behind Mercedes, Vettel and Ferrari showed their real potential in practice and qualifying and were able to carry that momentum forward into the race. When the lights went out at the start, Hamilton pulled away from Vettel but the race turned in Ferrari's favor when Sauber's Marcus Ericsson spun off at the start of lap four to bring out the safety car. While Mercedes pulled both their cars into the pits to put on hard tyres, Vettel stayed out on the medium compound and made the lead stick until the end of the race as Mercedes scrambled around trying to outsmart the leader but unable to rein him in. Ferrari's Kimi Raikkonen overcame a tough qualifying session and an early puncture to finish fourth, well clear of Valtteri Bottas in a Williams and Brazilian team mate Felipe Massa. Vettel, who finished fifth in the standings last year after four successive titles, has now won races for three separate teams -- Toro Rosso, Red Bull and Ferrari. McLaren put a positive spin on a poor day as both Fernando Alonso, back in action after missing the season-opener following a pre-season crash, and Jenson Button pulled out of the race. After two races, Hamilton leads the driver's standings on 43 points, Vettel sits second on 40, with Rosberg on 33 and Massa on 20. - Reuters