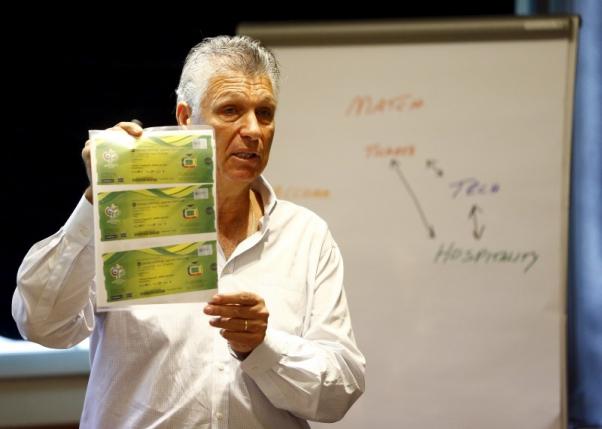 ZURICH/NEW YORK - World football body FIFA put Jerome Valcke, its second-ranking official, on leave on Thursday just hours after an ex-footballer raised allegations he was involved in a plan to resell 2014 World Cup tickets for a lucrative profit. FIFA, which has been rocked by Swiss and US corruption investigations, said in a statement it was made aware of allegations involving Valcke and had requested a formal investigation by the FIFA ethics committee. The swift action against his second-in-command is another major blow for FIFA President Sepp Blatter as questions about corruption during his 17-year reign build. The allegations against Valcke come on top of probes by the US Department of Justice and the Swiss Attorney General's Office into corruption at FIFA after the indictment of 14 senior football officials and sports marketing executives in May. Blatter announced in June only days after the unveiling of the US indictment that he would be stepping down as president following an election in February. Earlier on Thursday, former Israeli football player Benny Alon said at a news conference in Zurich that he agreed in 2013 to pay cash to Valcke to secure plum World Cup tickets in Brazil. He said the plan was to then sell the tickets to fans at a markup and split the proceeds with Valcke. Alon said the deal fell through and he never paid the football official. Reuters could not independently confirm Alon's claims. Valcke "unequivocally" denied the allegations as "fabricated and outrageous" in a statement from his US lawyer Barry Berke. "Mr. Valcke never received or agreed to accept any money or anything else of value from Mr. Alon," the statement said. FIFA controls the rights to sell all the World Cup tickets and has sanctioned officials in the past for reselling the coveted World Cup spots at a higher price. Earlier this week US and Swiss authorities said they were expanding their corruption investigations and more arrests were expected. Neither Blatter nor Valcke face charges in either the US or Swiss investigations of FIFA. A spokesman from the Brooklyn prosecutor's office handling the US case declined to comment on the news of Valcke's departure. FIFA's statement did not specify what allegations against Valcke needed to be investigated by the Ethics Committee. But two sources familiar with the matter said Alon's claims were the immediate cause of Valcke being placed on leave. The sources added, though, that questions over Valcke had been mounting since May and could have contributed to the decision. US prosecutors believe Valcke was involved in 2007 in bank transactions worth $10 million in which the South African government approved money to support the African diaspora in Caribbean countries, a person familiar with the matter told Reuters in June. Prosecutors say the payments were aimed at winning votes for South Africa to host the 2010 World Cup. Valcke confirmed he signed off on the payments but denied any wrongdoing. The transactions are central to a US bribery investigation into football's governing bodies. ALLEGED TICKET DEAL Alon got into the ticket marketing and hospitality business after retiring from the game as a player. He said he was working at ticketing firm JB Sports Marketing AG in 2013 when he discussed with Valcke the allocation of tickets with better views of the field for the Brazil World Cup. Alon says he informally agreed to split revenues from the re-sale of the tickets with Valcke 50-50 in a deal that could have netted the football official more than $2 million. While Alon provided emails to the media he said backed up his claims, the documents were incomplete and could not be independently verified by Reuters. Berke, Valcke's lawyer, said in his statement that "FIFA entered into an agreement with Mr. Alon's company, JB Sports Marketing. That agreement and FIFA's subsequent business dealings with Mr. Alon were vetted and approved by FIFA and its legal counsel." FIFA did not respond to a request for comment on Valcke's statement. Valcke, who had already indicated he was likely planning on stepping down in February like Blatter, has had a checkered career at FIFA. He originally joined in 2003 as marketing director but was fired in December 2006 for his part in botched sponsorship negotiations with credit card firms MasterCard Inc (MA.N) and Visa Inc (V.N). He was dismissed when a New York court ruled that FIFA had "lied repeatedly" during World Cup sponsorship negotiations with MasterCard, but eight months later he was re-hired as secretary general. Markus Kattner, FIFA's Deputy General Secretary, will temporarily take over Valcke's duties, according to a FIFA spokesman. -Reuters