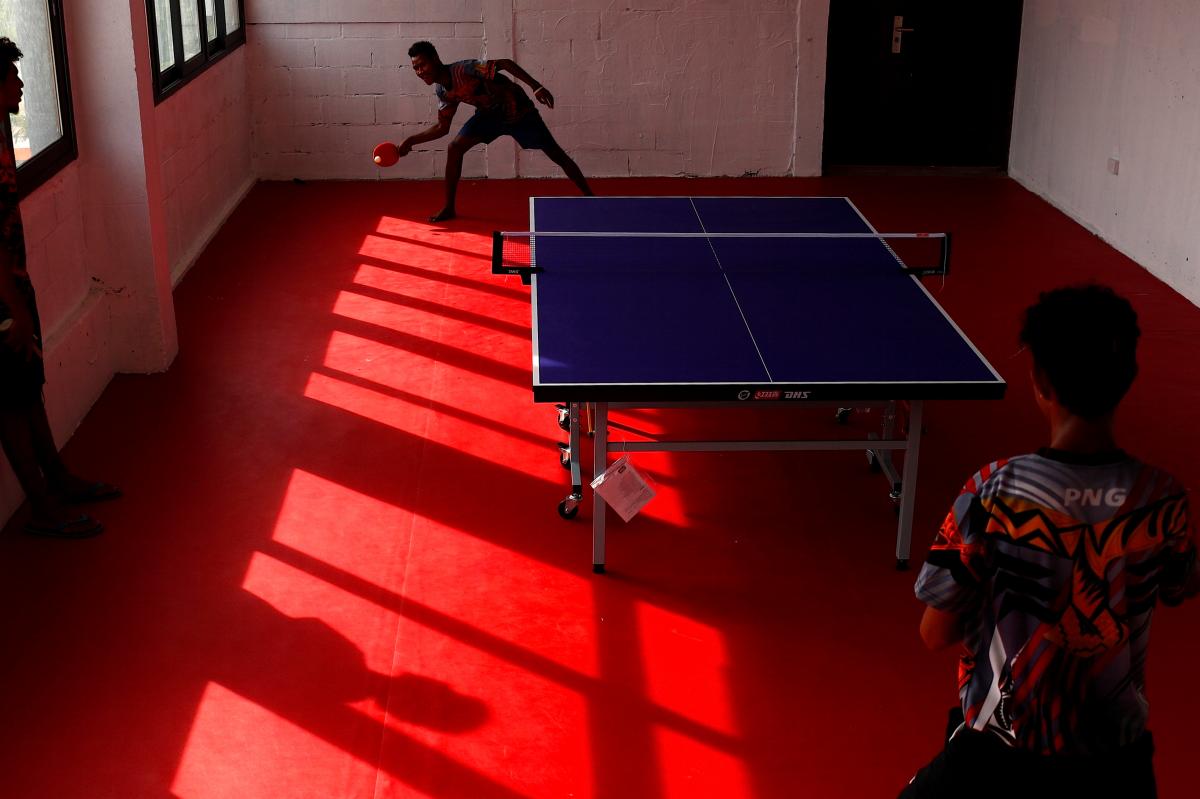 PORT MORESBY (Reuters) - Inside a Chinese-funded facility perched on a steep hill overlooking Port Moresby’s sparkling harbor, Papua New Guinea’s best table tennis players are honing techniques picked up months earlier on a sponsored trip to Shanghai. China’s backing is helping the sport, also known as ping-pong, establish an unlikely foothold in the Pacific nation better known for its love-affair with rugby league. Although the number of Papua New Guinea (PNG) enthusiasts is small, table tennis’ prestige is on the rise. Its governing organization believes its players could soon start qualifying for the Olympics, a rarity in the South Pacific and a first for table tennis in PNG. PNG’s top players were also given the opportunity to meet Chinese President Xi Jinping on his trip to Port Moresby in November - a visit marked by open hostility between China and the United States over their competing ambitions for the region.
In a PNG newspaper editorial just before his visit, Xi wrote of his goal to “write a new chapter in people-to-people friendship”, providing sport as an example. The wrap-around effort from China’s head of state, officials, businesses, and sports stars is part of a soft power push that represents the next phase of Xi’s hallmark Belt and Road program at a time when Western nations are trading barbs with China over its growing clout in the Pacific. “They’re all trying to implement the policies and the goals (of) President Xi Jinping,” said George Shao, a Port Moresby-based Chinese businessman and president of the PNG Table Tennis Federation. “It’s a...platform to improve peoples’ relationship from the two countries...we are connected together.” Much of China’s connection to the South Pacific to date has been through large-scale infrastructure projects that have resulted in hefty debt burdens to the mostly small and poor island nations. PNG holds the largest debt to China in the South Pacific, at almost $590 million, largely for infrastructure projects such as roads, stadiums, university buildings and fish processing plants. The West has raised concerns that PNG’s debt burden makes it vulnerable to political influence from Beijing. Last month, the United States and Australia pledged to build a naval base in PNG, shutting out a rival Chinese proposal over fears the facility could one day host Chinese military vessels in the strategically important area. “They’re ‘softening’ it with efforts such as the ping-pong diplomacy,” said Stanley Rosen, an expert in Chinese politics at the University of Southern California’s US-China Institute. “Soft power will be increasingly used in the Pacific.”

Almost 50 years ago, China and the United States used “ping-pong diplomacy” to help mend relations, with an exchange of players clearing the way for U.S. President Richard Nixon to visit China in 1972. Along with table tennis, China is also ramping up Mandarin language classrooms and university scholarships around the South Pacific. Beijing has also purchased radio frequencies in the region and has deployed a Navy hospital ship to provide medical treatment, including traditional Chinese medicine. Still, table tennis is unlikely to ever overtake rugby league in a country where locals pour onto fields to play in the evenings and where violence between passionate supporters of rival teams sometimes breaks out. In a training center provided by a Chinese developer, PNG’s national players slip off their flip flops and leave them beneath tables on a specialist bright red sports floor, both donated by sports equipment firm Shanghai Double Happiness. The players have also received grants from the Chinese embassy for tables and are in talks to see whether it will fund a full-time Chinese coach, as it does in Vanuatu. Members of the national team are sent to China before big international competitions for weeks of training, funded by Chinese local governments and training institutions. “Shanghai is a nice place so when I heard that we were going to Shanghai I was very happy, excited to go,” said Geoffrey Loi, an 18-year-old high school student who is seen as PNG’s best chance at a place in the Paris Olympics in 2024. “They have the best training facilities and the best coach...we learned a lot of things.” Numbers are still small, with around 20 players on the national team and about 300 taking part in competitions, but experts say it provides a foothold in the battle for hearts and minds. “At least China starts somewhere by...engaging with ordinary citizens,” said Teddy Winn, a politics academic at the University of Papua New Guinea. Rea Loi, the team’s coach and Geoffrey’s father, said he was proud of how far his sport had come with the support of China. “There are famous sports in Papua New Guinea, greater sports...but no other sports were involved, who got to meet President Xi Jinping, only table tennis.”