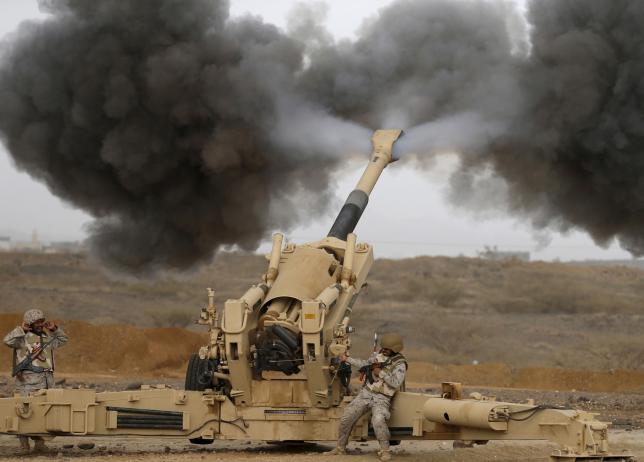 ADEN - Militiamen in southern Yemen said on Tuesday they had pushed back Iranian-allied Houthi rebels on several fronts, three weeks into a Saudi-led air strikes against the northern movement of Shi'ite Muslim fighters. In the southern port city of Aden, which has seen nearly three weeks of fierce street fighting, Houthi fighters withdrew from the Khor Maksar district, home to an international airport and several foreign missions. The pullout deprives the Houthis of a bridge to downtown districts where they are facing heavy resistance from local fighters. Saudi Arabia and Sunni Arab allies have been bombing the Houthis to try and drive them away from Aden, the last major city in Yemen loyal to President Abd-Rabbu Mansour Hadi, who has fled to Riyadh. The conflict in Yemen is widely regarded as a sectarian proxy war between predominantly Sunni Saudi Arabia and Shi'ite Iran. Riyadh says it is protecting Hadi and his government in exile from the Houthis, but as the world' largest oil exporter, Saudi Arabia is also unhappy at the prospect of protracted upheaval in its southern neighbor. Hadi and his Saudi backers also face fierce opposition from soldiers loyal to former Yemeni president Ali Abdullah Saleh, a shrewd political operator who has teamed up with his old foes the Houthis. Al Qaeda, which has staged suicide bombings against the Houthis, also poses a threat to Yemen's stability. Nearby shipping lanes and the narrow Bab el-Mandeb passage, through which nearly 4 million barrels of oil are shipped daily to Europe, the United States and Asia, could also be at risk from the fighting. SOUTHERNERS MAKE GAINS, SUPPLIES LOW Southern militia sources said they wrested control of an infantry base loyal to the Houthis after heavy fighting on Monday night near the Balhaf liquefied natural gas (LNG) plant in southern Shabwa province on the Arabian Sea. Yemen LNG, the company managing the facility, said it had halted production due to insecurity and began evacuating its staff, while militia sources said they had moved into the port to secure it from looting. In the southern province of Dhalea, militiamen said their fighters had killed around 40 Houthis and allied soldiers over the past day, although this could not be independently confirmed. In the southern town of Houta in the province of Lahej southern fighters said they attacked a Houthi tank with rocket propelled grenades and machine guns on Monday night, killing around 15 rebels. Weeks of street battles have left parts of once thriving Aden in ruins and led to shortages of water, food and electricity. But armed townspeople say they have laid siege to pockets of Houthi and army fighters loyal to Saleh, forcing them to surrender in the dozens after running out of supplies. Mosque loudspeakers blared appeals for the fighters to turn themselves in. "We won't rest until we've ejected them from all our areas and neighborhoods," one fighter in Khor Maksar told Reuters. - Reuters