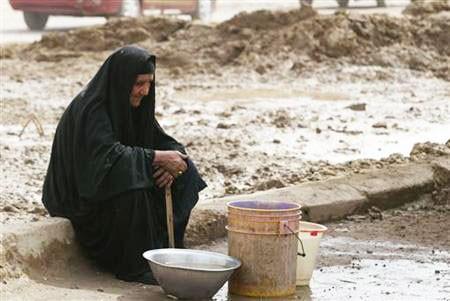 GENEVA - Fighters are increasingly targeting water and sanitation facilities across the Middle East, exacerbating severe shortages for agriculture and households, the International Committee of the Red Cross (ICRC) said on Wednesday. Consumption of water in the volatile region with rising populations was already at unsustainable levels in many areas hit by record-low rainfall and drought, but wars have pushed systems "close to the breaking point," the aid agency said. Militants in Syria, Iraq and Gaza have also used access to water and electricity supplies as "tactical weapons or as bargaining chips," the ICRC said in a report. "Heavy fighting and direct targeting have destroyed water pipes and power lines, leaving this vital resource away from hundreds of millions of people that are at great risk of water-borne diseases," said Robert Mardini, head of ICRC operations for North Africa and the Middle East. Sanitation often got a low priority during the fighting, the ICRC said. "It is a 'ticking time bomb' in terms of its impact on the general environment, water resources (surface and groundwater), and by extension, to human health," said Michael Talhami, ICRC regional water and habitat advisor. Gaza's only power plant was damaged during the 2014 war between Israel and Palestinian militants. The Gaza Company for Generating Electricity said an Israeli tank shell hit the main fuel tanks, taking out almost all capacity. In Syria, now in a fifth year of war, drought has greatly reduced wheat production, meaning higher imports, the ICRC said. Areas around the capital Damascus are hard-hit, with some systems losing more water to leaks than they are able to deliver, the report said. "The network is severely damaged in every corner of the city, so you have leakages everywhere." Syria's two main waste-water treatment plants, for Aleppo and Damascus, are virtually destroyed, according to the ICRC which helps disinfect nearly 80 percent of the country's water. "One of the greatest concerns is that untreated waste-water might seep into local aquifers, thereby contaminating water supplies and leaving an already vulnerable population more susceptible to water-borne diseases," it said. Water scarcity is a pressing problem in Yemen, the Arab world's poorest country that has descended into civil war, and where the water table is dropping every year, it said. "In Yemen, it's foreseen that by 2025 Sana'a the capital will have no more water." - Reuters