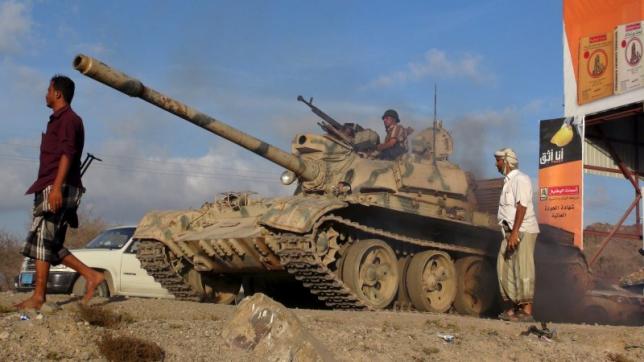 ADEN - Iran-allied Houthi militiamen pushed into the northeastern outskirts of the Yemeni port city of Aden on Monday amid heavy clashes with loyalists of President Abd-Rabbu Mansour Hadi, sources on both sides said. Artillery and rocket fire struck the area on the approaches to the city, Hadi's fighters said, after the Houthis made a fresh advance from the east along an Arabian Sea coast road. Aden is Hadi's last bastion of control in Yemen and remains besieged despite a fifth day of Saudi-led air strikes aimed at checking the Houthi gains. North of Aden, residents in the city of Dhalea said Houthi fighters backed by allied army units loyal to former president Ali Abdullah Saleh shelled militia opponents with tanks and artillery. Five civilians were killed in heavy street fighting, they said. Saudi Arabia, backed by regional Sunni Muslim allies, launched an air campaign to support Hadi after he withdrew last month from the capital to Aden. He left Yemen on Thursday to attend an Arab summit and has not returned. The fighting has brought civil war to the Arabian Peninsula's poorest country, which was already sliding into chaos with a growing secessionist movement in the south and a covert US drone campaign - now stalled - against al Qaeda in the east. The growing power of the Houthis, part of a Shi'ite minority that makes up about a third of the population, also means Yemen has become the latest stage for Saudi Arabia's power struggle with Iran. The two regional rivals support opposing sides in Syria's grinding civil war and in neighboring Lebanon. Tehran also supports and arms Shi'ite militias in Iraq, although it denies Riyadh's accusations that it supports Yemen's Houthis militarily. In the capital Sanaa, controlled by the Houthis, jets struck around the presidential palace next to the diplomatic quarter early on Monday, as well as a weapons depot in the Nugum mountain overlooking the capital. "It was a night from hell," a Yemeni diplomat said. "PLAYING WITH FIRE" Speaking at the Arab summit in Egypt on Saturday, Hadi described the Houthi movement as "Iran's puppet" and accused it of destroying Yemen through what he called its political immaturity. Hadi left the summit in the Saudi King Salman's plane and is now staying in the Saudi capital. Iran's former president, Akbar Hashemi Rafsanjani, described the Saudi-led military campaign in Yemen as a dangerous mistake. "They have started playing with fire," Fars News agency quoted him as saying. The Arab leaders agreed at their meeting in Egypt to form a unified military force to counter growing regional security threats such as the Yemen conflict. But working out the logistics of the force will be a protracted process and Yemen's rugged geography, internal power struggles and recent history all present major challenges to any military campaign. Just four years after the 1990 unification of North and South Yemen, civil war erupted when southerners tried to break away, but were defeated by Saleh's northern forces. In the 1960s, intervention by Saudi Arabia and Egypt on opposing sides of a civil war in North Yemen led to a long and damaging military stalemate. Saudi Arabia says it is focusing for now on air strikes against the Houthis, rather than a ground campaign, promising to increase pressure on them over coming days. It says it has support from eight other Arab states as well as Pakistan, although it is unclear how much of a role many of those countries are playing. Pakistan said it had not formally decided what support to offer. The White House says it will not join directly in military operations but has set up a cell to coordinate US military and intelligence support to the operation. US officials said they were sharing intelligence information on a limited basis so far. On Sunday, sources said Yemeni exports of liquefied natural gas (LNG) were running as normal despite the shutdown of major seaports. But French oil firm Total said on Monday operations at its Block 10 have been reduced, with gas production maintained only for local power generation and to supply nearby areas. Several countries have been evacuating citizens from Yemen in recent days. Around 500 Pakistani nationals were flown out of the Red Sea port of Hodeida on Sunday, and India said on Monday it was preparing to fly out 500 people from Sanaa. Saleh was forced to step down after a 2011 popular uprising, ending more than three decades in power, but still wields influence in the Arabian Peninsula's poorest country and has the loyalty of much of the army. He has called for an end to the Saudi campaign, promising in return not to stand again for the presidency. But he has no direct authority over the Houthi fighters who represent a Shi'ite minority that makes up a third of Yemen's population. - Reuters