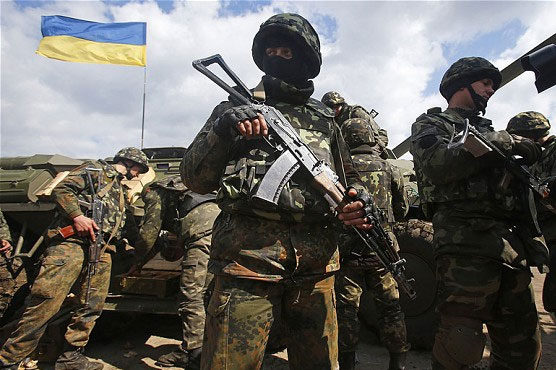 (Reuters) - Ukraine and Russian-backed rebels fought fiercely across the east of the country on Friday despite a new peace deal brokered by Germany and France. A ceasefire is due to come into effect from Sunday under the agreement, which also envisages a withdrawal of the heavy weapons responsible for many of the 5,000 casualties in the conflict that broke out almost a year ago. Kiev said pro-Russian rebels had built up their forces across separatist-held zones since the deal and both sides accused each other of killing civilians. Two people were killed and six wounded when a shell hit a cafe in the Kiev-controlled town of Shchastya near rebel-held Luhansk in eastern Ukraine, a local official said, adding other shells had struck elsewhere in the town. "The town's heating system is broken, power lines are damaged as well as the water supply ... So this is how a comprehensive ceasefire is prepared for," the head of the Kiev-controlled administration, Hennadiy Moskal, said online. The rebels accused Ukrainian forces of shelling the separatist stronghold of Donetsk and the town of Horlivka, where they said on their website that three children had been killed. The sound of artillery could be heard in the outskirts of Donetsk and clouds of black smoke hung over its suburbs. Outgoing fire from the Ukrainian side was visible on the road between Kiev-controlled Kramatorsk and rebel-held Donetsk and rebels at a checkpoint near Donetsk said they had been hit by mortar strikes. They mocked the impending truce. "What sort of ceasefire? Don’t make me laugh. This is already the second or third ceasefire," one said. The Group of Seven industrialised countries issued a statement late on Friday calling on all sides to refrain from actions in the coming days that would hinder the start of the ceasefire. It said G7 countries were ready to take "appropriate measures" against those who violate the agreement, an apparent threat of more economic sanctions against Russia. The deal, sealed by the leaders of Germany and France after 16 hours of all-night talks in Minsk, capital of Belarus, with the Russian and Ukrainian presidents, was soon overshadowed by the clashes. A Ukrainian military spokesman said 11 soldiers had been killed and 40 wounded in the past 24 hours. "The enemy continues to build up forces in the main areas of the armed conflict," Andriy Lysenko said. Fighting was intense around Debaltseve, a railway junction linking the two main rebel areas, where separatists used rockets and artillery to attack government forces holding the town. "Rebels are repeatedly storming the strongholds and base camp of Ukrainian forces," in and around Debaltseve as well as firing artillery, mortars and rockets, Lysenko said, stressing that government troops had held their positions. The United States and Europe have threatened further sanctions against Moscow if the rebels seize more territory. DISAGREEMENTS Ukraine's pro-Western president said he was not naive and wanted to make clear the country was a long way from peace. "Nobody has a strong belief that the peace conditions which were signed in Minsk will be implemented strictly," Petro Poroshenko said. Away from the battlefield, disagreements surfaced over whether a rebel amnesty or the release of a Ukrainian pilot detained by Russia were part of the ceasefire deal. Western diplomats said the European Union would go ahead on Monday with planned sanctions against 19 Ukrainian separatists and Russians, despite the ceasefire. NATO and the United States said the fighting ran counter to the spirit, if not the letter of the agreement and U.S. officials said further sanctions were still on the table. At an EU summit in Brussels, the leaders of Germany, France and the European Council also said new sanctions were possible. The French, German, Russian and Ukrainian leaders are expected to speak again by phone on Saturday in the hours before the ceasefire is due to take effect. Kremlin spokesman Dmitry Peskov said Moscow expected all points of the deal to be implemented, but that Russia had not promised to free Nadezhda Savchenko, a detained Ukrainian pilot that Kiev wants free. Her case would be decided by a Russian court, he said. Ukraine said it had not agreed to an amnesty for all rebels, drawing an angry response from the separatists. Sanctions by the EU and United States have piled intense economic pressure on Russia'seconomy, which has also been hit by a collapse in oil prices. Russia's economy minister said he hoped sanctions would be lifted soon. VAST "BUFFER ZONE" On Thursday, German Chancellor Angela Merkel described the agreement with Russia onUkraine as a good start but said undertakings must now be respected. Ukraine reported a new, mass influx of Russian armour into rebel-held eastern Ukraine as the agreement was being finalised. The deal calls for the withdrawal of heavy weapons from the front line when and if the ceasefire has taken hold, and constitutional reform to give eastern Ukraine more autonomy. The rebels have advanced far past an earlier ceasefire deal, agreed in September, and the new agreement appears to envisage them pulling their guns back around 75 km, to take them back behind it, while Ukrainian guns would move 25 km back. This would leave a buffer zone 50 km wide, a challenge for the monitors from the Organization for Security and Cooperation in Europe who are expected to patrol it. It also appears to take more territory outside Kiev's control. The White House, under pressure from Congress to provide arms to the stretched Ukrainian military, said the deal was "potentially significant" but urged Russia to withdraw soldiers and equipment, and give Ukraine back control over its border. Russia denies arming the rebels and sending troops to fight alongside them, despite whatUkraine and its Western allies say is overwhelming evidence.