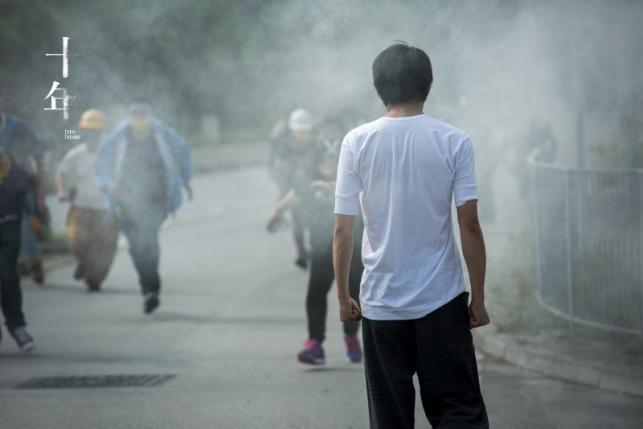 HONG KONG – A Hong Kong film portraying a dystopian future under Chinese Communist Party rule won one of Asia's top film awards on Sunday at a time when Beijing's attempts to rein in the city's democratic development have stoked growing political tensions. "Ten Years", a feature-length film comprising five short vignettes depicting a dark vision of the city in 2025 is a surprise hit. It strikes a public chord nearly 16 months after tens of thousands blocked roads across the city as part of an "Occupy Central" civil disobedience movement to demand China's leaders allow full democracy in 2017. The low-budget, independent film brushed off competition from commercial hits like martial arts flick Ip Man 3. "Ten Years exposed the fear of Hong Kong people (towards China)," said Chow Kwun-wai, one of the five directors who worked on it after winning best picture at the Hong Kong film awards that recognizes film excellence across Asia. "Ten Years also provided Hong Kong people and us a chance to show that we have no fear." After the awards, a few Chinese media portals including Tencent and Sina omitted any mention of the film as best picture winner while reporting on other results of the night. People across Hong Kong, which reverted from British to Chinese rule in 1997, have in recent months thronged to cinemas and open-air screenings to watch the controversial movie. Scenes include those of an old woman setting herself alight before Hong Kong's British Consulate and Hong Kong kids dressed in military uniforms policing adults in scenes echoing child "Red Guards" from China's fraught 1966-76 Cultural Revolution. Few, including the film's directors, had expected it to win, given its political undertones and dystopian vision. China's state-controlled Global Times denounced the film in a January editorial as absurd and pessimistic and said it was a "thought virus". Soon after, screenings of the film stopped in Hong Kong cinemas. Cinema operators told the film-makers they could no longer show it because of scheduling issues. "People in the movie industry gave Ten Years the best film award to express their position. This is the thing that touched me the most," Chow added. The scenes, while fictional, underscore tension simmering between mainland China and Hong Kong, that have resulted in a recent riot and growing grassroots calls by radical protests for greater autonomy and even independence from China. –Reuters