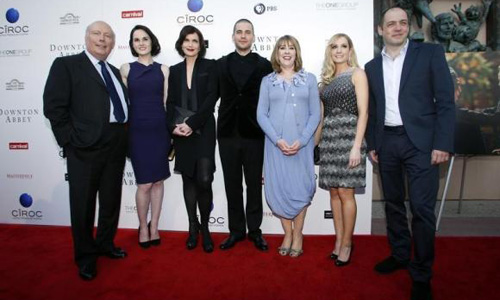 LONDON - The hugely successful British period drama "Downton Abbey" will wind up after the sixth season, its executive producer said on Thursday, but a possible movie version cannot be ruled out. "There's so many different explanations" for the decision, Gareth Neame said in a conference call with reporters. "I think our feeling is that it's good to quit while you're ahead." Creator Julian Fellowes, the sole writer of the drama about an aristocratic British household in the early 20th century, told Reuters he is nearly finished writing the sixth season and knows how it will wrap up. "Obviously, I am sad," Fellowes said by phone. "It has been an extraordinary part of my life and career." But he noted that the conclusion will be a boon for the cast, especially the younger actors. "They've got a tremendous launch pad now from 'Downton,'" Fellowes said. "You can't stay on the launching pad forever. You've got to fly. I think that is what they feel and I wish them well." Neame denied recent media speculation that the show was ending so Fellowes could go to work on other projects. "It really isn't the case that Julian has said, 'I want out, I want to do other things' and everyone else has been forced," he said. The story began with the loss of Downton heirs in the sinking of the Titanic and took the audience through the devastation of World War I, the shifting upstairs-downstairs class divisions, the emergence of women's rights, struggles with homosexuality and the dwindling wealth of Britain's landed gentry. Set in Highclere Castle in Berkshire, England, the series has become one of the biggest international hits ever for British television. It is watched in countries as diverse as China, Sweden, Russia and South Korea, with American viewership surpassing all expectations and setting records for U.S. public service broadcaster PBS. MAYBE A MOVIE? Neame said there were no plans for spinoffs, but he did not deny rumors about a "Downton Abbey" movie. "I can't confirm definitely it is going to happen ... we will see," he said. "It's a very emotional day for all of the people who have been involved in making the show." The cast has included some big names in the British theater and acting world, including Hugh Bonneville as Robert Crawley, Earl of Grantham; Maggie Smith, as his mother the Dowager Countess of Grantham and Laura Carmichael as Lady Edith Crawley. Big questions for Season 6 are whether Lady Mary will find love again; if Lady Edith will make her mark as a single mother and businesswoman and if Tom, the chauffeur turned Lord Grantham's son-in-law, finds success in America. Downstairs, it remains to be seen whether Anna and Bates will find peace and how household chiefs Carson and Mrs. Hughes fare after a life of service. Fellowes declined to single out any favorites among the characters or say who he will miss the most. "I have loved them all," he said. - REUTERS