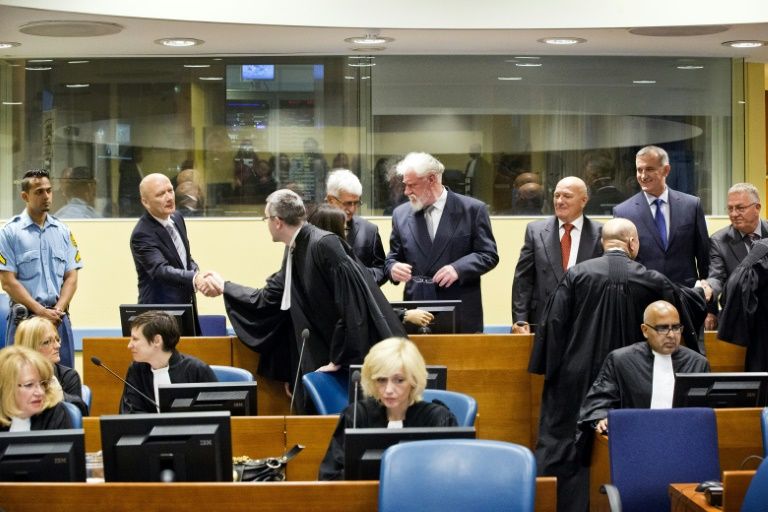 THE HAGUE (AFP) - UN judges on Wednesday deliver their last ever verdict for war crimes committed in the 1990s Bosnian conflict, in the appeal case of six former Bosnian Croat political and military leaders.

The appeals verdict comes a week after the International Criminal Tribunal for the former Yugoslavia (ICTY) jailed top Bosnian Serb ex-commander Ratko Mladic for life on 10 charges of genocide and war crimes, and will draw the curtain on more than two decades of work.

On Wednesday, the judges sitting in The Hague will rule in the appeal brought by ex-prime minister of the breakaway statelet of Herceg-Bosna, Jadranko Prlic, and five others against their 2013 conviction and sentences ranging from 10 to 25 years in jail.

All six guilty were found guilty of taking part in a scheme to remove Bosnian Muslims "permanently and create a Croatian territory", which included the southern city of Mostar besieged for nine months.

The bloody 1992-1995 war in Bosnia, in which 100,000 people died and 2.2 million were displaced, mainly pitted Bosnian Muslims against Bosnian Serbs, but also saw some brutal fighting between Bosnian Muslims and Bosnian Croats.

Prlic, 58, was sentenced to 25 years on 26 charges of aiding and abetting the murder, deportation and harsh detention of Muslims in eight municipalities and a network of detention centres.

He has vehemently denied the charges, telling five appeals judges in March he "was not part of the chain of command" of the main Bosnian-Croat army in Bosnia, the HVO.

But Croatian communities needed to organise themselves, militarily as well, as the Bosnian Republic had not defended them, he said.

The prosecution has also appealed, urging judges to impose 40-year terms on Prlic and three co-defendants, saying the "crimes were massive in scale."

"Tens of thousands of Muslims were evicted from their homes... thousands were arrested and detained in awful conditions," said prosecutor Barbara Goy.

"Muslims were killed during attacks or when forced to work on the front-lines. They were raped, they were sexually assaulted. Muslim houses and mosques were destroyed," she said.

Prlic has been on trial since 2006, along with his co-defendants former defence minister Bruno Stojic, 62, and four other military officials: Slobodan Praljak, 72, Milivoj Petkovic, 68, Valentin Coric, 61, and Berislav Pusic, 65.

Praljak was specifically charged with ordering the destruction of Mostar's 16th-century bridge in November 1993, which judges said "caused disproportionate damage to the Muslim civilian population". The bridge was rebuilt in 2004.

Wednesday's verdict is the last at the ICTY set up in 1993 by the UN to prosecute those behind the Balkans conflicts.

Chief prosecutor Serge Brammertz told AFP it was "an important judgement ... there is a lot of attention coming from the Croatian community in relation to this case, also from Zagreb."

The Prlic case was one of the court's most complex. A total of 326 witnesses testified and almost 10,000 exhibits were presented.

In the 2,629-page judgement, judges said the six men were part of a plan to ultimately reunify with or have very close ties with Croatia.

"The crimes committed were not the random acts of a few unruly soldiers" but aimed "to permanently remove the Muslim population from Herceg-Bosna," they said.

This was achieved "by conducting mass arrests of Bosnian Muslims who were then either murdered, beaten, sexually assaulted, robbed of their property and otherwise abused".

In one example, Bosnian Croat soldiers forced a detained Muslim to lick his own blood from the floor so it would "not remain in Herceg-Bosna."

Then ICTY prosecutor Kenneth Scott told AFP in 2013 the ruling had been "the first time the court was very clear on the significant role played" in the conflict by Croatia's first president, the late Franjo Tudjman.

Tudjman died in 1999 and was never indicted.

Herceg-Bosna was proclaimed in August 1993, but dissolved in 1995 just before the Dayton peace accords that ended the war, and integrated with the Bosnian Serb entity Republika Srpska to become Bosnia-Hercegovina.

The defendants all surrendered in 2004, with Croatia under pressure to cooperate with the ICTY as a condition for joining the European Union.